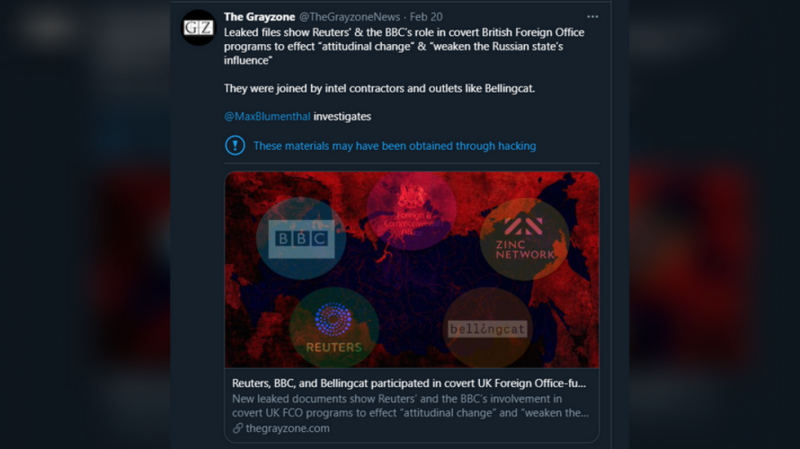 A story published late last week by Grayzone editor Max Blumenthal showed how major news agencies like Reuters and the BBC worked in secret with the UK’s Foreign and Commonwealth Office to cultivate a group of foreign reporters – many based in Russia and Russia’s near-abroad – to reliably promote the government’s “message.” However, as of Tuesday, those attempting to share the piece on Twitter were met with a warning: “These materials may have been obtained through hacking.”

Users also reported a second prompt when they attempted to ‘like’ the story, again sternly warning of potential ‘hacking’ while urging them to “help keep Twitter a place for reliable info.” Though the second missive suggests users can “find out more” about the story in question, the link merely leads to a page explaining Twitter’s policies on hacked materials.

While Blumenthal acknowledges the story – which was covered separately by RT’s Kit Klarenberg – is based on a trove of leaked documents, so far their exact provenance remains unclear, released online anonymously earlier this month. However, given that leaked documents of uncertain origin regularly feature in media reports, some observers questioned why the Grayzone story received special treatment. Journalist Dan Cohen noted that a piece critical of China and published in the Intercept in January, similarly based on leaked documents, did not warrant the same ‘hacking’ label, accusing the platform of a double standard.

Twitter’s first use of its ‘hacked materials’ policy kicked up major controversy last year, barring links to an October New York Post story reporting on the foreign business dealings of then-Democratic presidential candidate Joe Biden and his son Hunter. The company updated the policy following the backlash, unblocking links to the Post piece, and since then has apparently added a ‘hacking’ label to only one other story – in that case on Pfizer’s Covid-19 vaccine in January – as was noted by Mashable’s Matt Binder.

The notice has prompted heated criticism from journalists and other observers online. Palestinian-American journalist Ali Abunimah argued that by labeling the material as ‘hacked’, Twitter aims to discredit the story as a whole, while others said the flagging itself is less concerning than Twitter’s threat to suspend those sharing so-called ‘hacked materials’.