Home / WORLD / Twitter and Facebook transformed US politics into a shouting match. Has it saved their monopoly status, or doomed it?

Twitter and Facebook transformed US politics into a shouting match. Has it saved their monopoly status, or doomed it? 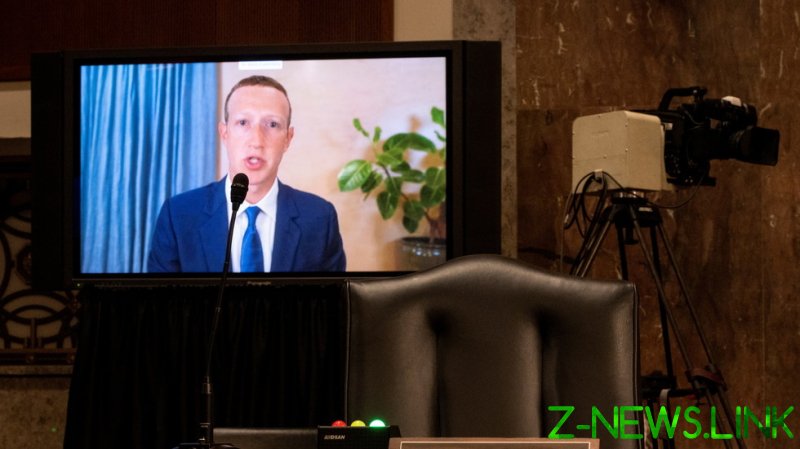 Twitter’s Jack Dorsey and Facebook’s Mark Zuckerberg must have felt a bit like Dr. Frankenstein as they were pulled between Democrats and Republicans during Tuesday’s Senate Judiciary Committee hearing on censorship and election meddling in social media. After all, their platforms created the political “monster” that is 2020’s divided America – a country in which civilized debate has been replaced by mudslinging and respectable individuals are wary of ideas that have not been pre-vetted by fact-checkers.

Democrats on the committee complained about a rising tide of ‘disinformation,’ ‘hate speech,’ and other terms frequently deployed to delegitimize political “wrongthink,” demanding even more censorship in the guise of preventing “election meddling” and “extremism.” One senator, Connecticut’s Richard Blumenthal, even threatened to bring down the antitrust hammer and enforce long-dormant monopoly laws if the platforms did not deliver his desired results in the upcoming Georgia Senate race (and maybe ban former Trump campaign strategist Steve Bannon, too).

Across the aisle, Republicans demanded the platforms supply lists of censored individuals, intent on proving both companies – whose employees are overwhelmingly Democrat in their political orientation – specifically target conservatives in enforcing platform rules. One senator, Missouri’s Josh Hawley, even threatened the megacorporations with subpoenas if they did not cough up these lists.

It’s not that Twitter and Facebook have been slacking where censorship is concerned – Dorsey admitted his platform labeled a whopping 300,000 election-related tweets with the “misleading” label since October 27, and Facebook has gone so censor-crazy it has ruled out “militarized language” alongside suggestions of voter fraud and voting-related disinfo. But the platforms’ hyperactive fact-checking has paradoxically created an environment in which users come to expect the labels and, not seeing them, believe a post must be true. A Facebook study conducted by Massachusetts Institute of Technology earlier this year proved how thoroughly that platform’s attempts to babysit users’ thoughts have backfired, indicating Americans have willingly ceded their critical thinking capacity to the social media behemoths.

As a result, members of Congress have grown ever more frantic about closing “disinformation windows” not yet covered by the platforms’ content policies. No sooner had they cracked down on “misinformation” related to the Covid-19 pandemic and the election than they were ordered to silence Holocaust and climate change “denial.” Should those subjects be eradicated, a new crisis will be manufactured. There are always new monsters to fight – and even the censors-in-chief are tired of it. “In terms of assessing what is misinformation, I think it’s important that we don’t become the deciders on everything that is true or false ourselves,” Zuckerberg – no free speech crusader – said during the hearing. It’s no wonder he’s exhausted – one side’s “truth” is the other side’s disinformation, thanks to opinion-manipulators like, well, Facebook.

Realistically speaking, no social media platform will ever be able to label every factually-incorrect post as disinformation, let alone every ideologically-“incorrect” post, as Democrats have made it clear they want. Nevertheless, both sides have valid concerns, and years ago their senators might have met on common ground to work out a mutually (dis)agreeable deal. With both parties operating in their own ideological echo chambers, however, negotiating with the enemy is verboten.

So rather than uniting to rein in the abuses of the absurdly powerful tech firms that built those echo chambers, committee members strived to score points off each other – as Hawaii’s Mazie Hirono (D) did with her smug claim that studies had proven there was no such thing as ideologically-biased Facebook censorship against conservatives – and deliver ‘gotcha’ retweetable soundbites, as Hawley did with his theatrical conclusion demanding “action against these modern-day robber barons.”

Listening to superannuated senators whose only social media use is conducted through interns deliver strong opinions about technology they didn’t understand, it was hard not to see another level of resemblance to the hyper-polarization of Facebook and Twitter. On both platforms, the Dunning-Kruger effect (in which an individual’s belief in their own competence increases in inverse proportion to their actual competence) runs rampant. Who hasn’t paged through both apps in despair over the uneducated political opinions of users who haven’t cracked a book since grade school?

Facebook and Twitter essentially sold their souls when they began doing the government’s bidding – turning over information on their users to intelligence agencies, allowing those agencies to operate sprawling networks of fake users in violation of the platforms’ own policies, removing specific content or entire accounts, and so on. Neither should be shocked now that the bill is coming due. If they don’t deliver on Congress’ demands, the long-threatened repeal of their section 230 legal immunity may come sooner, rather than later. But they can’t deliver for one “side” without upsetting the other, as Senator Joe Kennedy (R-Kentucky) observed, and they have only themselves to blame.