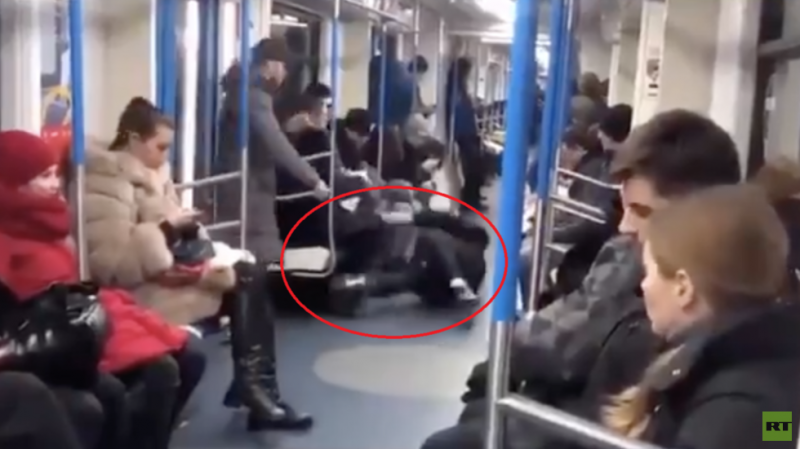 Karomat Dzhaborov was found guilty of hooliganism by a judge in the Russian capital on Monday over the stunt, which was filmed by his friends in February last year, just as fears of the emerging virus were beginning to pick up. Stanislav Melikhov and Artur Isachenko, who were with him at the time, were both given two-year suspended sentences.

In the video, published on his ‘Kara Prank’ Instagram channel, Dzhaborov can be seen stumbling in a packed metro carriage and falling to the ground. When concerned commuters step in to help him, he begins writhing and clutching his throat as if having a seizure. Someone in the clip then shouts “coronavirus,” sending passengers scrambling away from him.

Police detained the prankster a few days later and, when it emerged he had given the wrong address to interrogators, he was held in jail in the lead-up to the trial. Prosecutors had originally been seeking a four-year prison spell for the Tajik national.

Law enforcement officials said that Dzhabarov had deliberately “provoked panic” on the transit system, at a time when news of Covid-19’s spread in China and elsewhere was beginning to hit the headlines and the severity and symptoms of the disease were poorly understood. At the time, only two cases of the virus had been documented in Russia, but 6.21 million people have since officially tested positive.

In April, a group of students in Switzerland was threatened with criminal charges after a coronavirus prank landed them in hot water with their university. Originally planned as a gambit to get them to miss school, three young people falsified text messages from the health service to make it look as though they had been diagnosed with the virus. The move forced around 25 of their classmates into self-isolation for up to 10 days. “This is not just a childish prank, this is a serious incident,” Simon Thiriet, an education department spokesman said at the time.