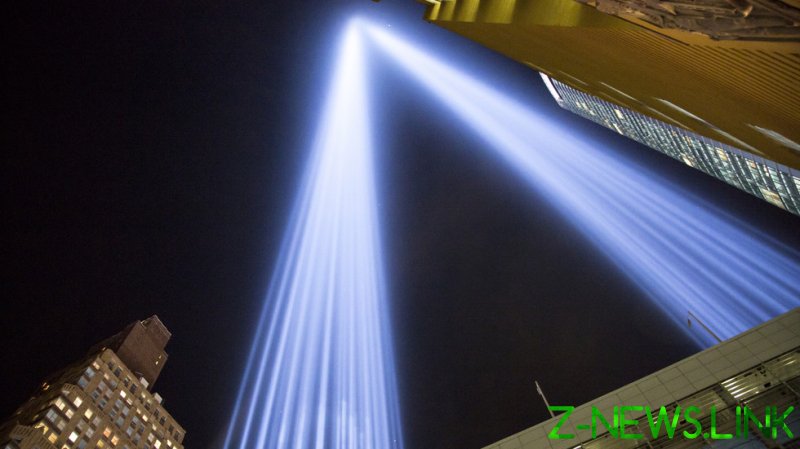 Family members of 9/11 victims have warned Joe Biden to stay away from the upcoming 20th anniversary memorial events, unless officials are willing to declassify documents that the relatives believe will prove the Saudi Arabian government was involved in the attacks.

“There is simply no reason – unmerited claims of ‘national security’ or otherwise – to keep this information secret,” an open letter, signed by 1,700 people directly affected by the incident, stated.

Allegations of Riyadh’s involvement in the tragedy have long abounded, not least because 15 of the 19 hijackers were Saudi citizens. The highly controversial 9/11 Commission Report of 2004 found no evidence “the Saudi government as an institution or senior Saudi officials individually” funded Al-Qaeda, but did identify Saudi individuals and organizations as Al-Qaeda’s primary funding source. Two commission co-chairs, Thomas Kean and Lee Hamilton, have since asserted that the investigation was “set up to fail.”

In March 2018, after many years of fruitless struggle, a US court finally allowed a lawsuit against the government of Saudi Arabia brought by the families of the attack’s victims, businesses, insurers, and over 20,000 people injured that fateful day, to proceed.

One of the key questions under consideration is the level of contact between the hijackers and potential or confirmed Saudi government operatives – be they diplomatic or intelligence staff, or otherwise. Nonetheless, the presiding judge has to date restricted plaintiffs’ discovery to just two individuals, Omar al-Bayoumi and Fahad al-Thumairy.

According to previously classified memoranda, the FBI “believes it possible” Bayoumi “was an agent of the Saudi Government and that he may have been reporting on the local community to the Saudi Government officials.” The Bureau also discovered that he had “ties to terrorist elements.” Thumairy was a Saudi Islamic Affairs official and imam at King Fahd Mosque in Los Angeles.

Both had intimate contact with American Airlines Flight 77 hijackers Nawaf al-Hazmi and Khalid al-Mihdhar after their January 2000 arrival in the US, and were named in a 2012 FBI report on the progress of Operation Encore, its investigation into Saudi government involvement in 9/11. The document was only released due to Freedom of Information litigation, and so comprehensively censored that even the probe’s title was redacted.

What remains extant indicates that Bayoumi and Thumairy “provided (or directed others to provide) the hijackers with assistance in daily activities, including procuring living quarters, financial assistance, and assistance in obtaining flight lessons and driver’s licenses,” with the latter “immediately [assigning] an individual to take care” of Hazmi and Mihdhar after meeting them.

Washington has gone to enormous efforts to suppress the unexpurgated FBI report, and any and all records related to Operation Encore, which collapsed in 2016 due to a purported byzantine bust-up within the Bureau over investigative methods. Throughout his tenure as Attorney General, William Barr has consistently blocked release of this additional information by asserting the government’s “state secrets privilege”.

However, the 2018 sworn declaration of former FBI counter-terror agent Catherine M. Hunt, a consultant for the law firm leading the 9/11 families’ legal action, fills in some of the gaps in the 2012 report, and indicates that Operation Encore’s activities were extensive. It’s one of very few documents related to the lawsuit to have been made public to date.

Multiple lengthy interviews with numerous key witnesses were conducted, sometimes over several years, and hundreds of pages of evidence were produced, with at least six Saudi government employees connected to Bayoumi and/or Thumairy investigated. The Bureau also launched a federal grand jury to look into a suspected US support network for the hijackers, which was suddenly and inexplicably terminated in 2016 while still very much active.

The ever-mysterious details of Hazmi and Midhar’s time in the US prior to the attacks may account for the grand jury’s precipitous shutdown. After all, despite being the men who were designated terrorist suspects by the CIA and NSA, neither the Federal Aviation Authority nor FBI were informed of their arrival in the country, the latter only being told in August 2001 – 20 months later – in a “very low key way”, by which time they’d gone to ground to prepare for 9/11, and couldn’t be located by authorities.

Richard Clark, a former US government terror chief, has suggested that the CIA deliberately withheld this information as they’d recruited Hazmi and Midhar, or were trying to. The 9/11 Commission didn’t explore this aspect of the case, or the theory that Bayoumi may have been monitoring or managing the two at the CIA’s behest.

Whatever the truth of the matter, Langley remaining tight-lipped also created a bizarre situation in September 2000 in which the future hijackers moved into the San Diego home of Bayoumi’s friend Abdussattar Shaikh, an FBI informant, who mentioned the pair to his handler. He also helped get Hazmi’s name, address, and home phone number listed in the local phonebook – but by the time the FBI knew to be on the lookout for them, they were long gone.

While in San Diego, Hazmi and Midhar regularly attended a mosque led by Anwar al-Awlaki, with whom they had a close relationship, and met behind closed doors on numerous occasions. He left California at the start of 2001 and headed to the Washington metropolitan area, where he became an imam at the Dar al-Hijrah mosque near Falls Church, Virginia – only a few miles from the Pentagon, and CIA and NSA headquarters.

Several hijackers, including Hazmi, followed Awlaki eastwards and attended his sermons there. His phone number was also found in the contacts of the “20th hijacker”, Ramzi bin al-Shibh, when police raided his apartment in Hamburg in the wake of 9/11. Unsurprisingly, Awlaki was immediately deemed a key person of interest in the FBI’s investigation of the attacks, and interviewed four times in the following eight days – in a bizarre coincidence, he was simultaneously attending Muslim outreach luncheons at the Pentagon, ostensibly as a representative of moderate Islam.

Having found Awlaki intensely suspicious, the Bureau placed him under 24-hour surveillance, closely monitoring and recording his every movement in minute detail, including dalliances with prostitutes and attendance at a prayer service for the Congressional Muslim Staffer Association at the US Capitol building.

Awlaki was eventually killed in a CIA drone strike in 2011 in Yemen. In the intervening years, he’d become a regional Al-Qaeda commander, repeatedly called for jihad to be waged on the US, and been implicated in numerous terrorist attacks. In a posthumously published article for Al-Qaeda’s Inspire magazine, Awlaki claimed the CIA and FBI had repeatedly attempted to recruit him as a spy.

One can’t help but wish the 9/11 victims families every success in their just quest for the answers and redress that have been denied them so long – but the truth behind what happened is obviously uncomfortable for both Washington and Riyadh, so may still prove elusive.