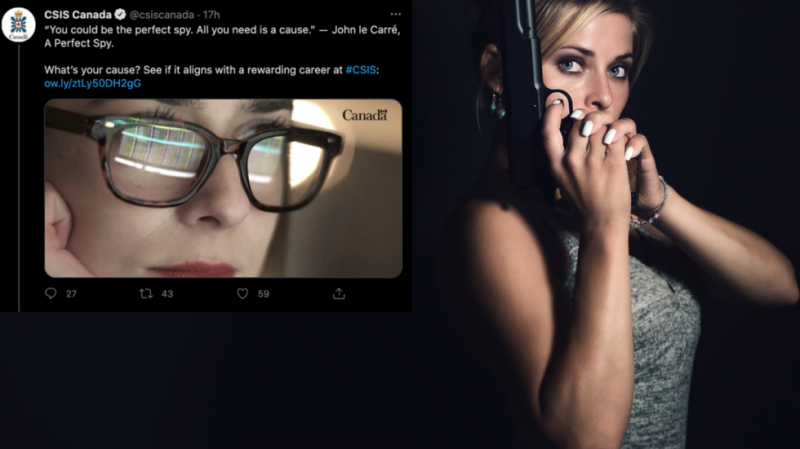 The Canadian Security Intelligence Service (CSIS) drew many bemused and sarcastic replies after its tweet about job postings which quoted the work by Le Carré, the pen name of British author and former spy David Cornwell.

“You could be the perfect spy. All you need is a cause,” Canada’s CSIS wrote, quoting le Carré’s 1986 novel ‘A Perfect Spy’.

“What’s your cause? See if it aligns with a rewarding career at #CSIS.”

To cover their tracks in response to the backlash, the agency claimed they were paying homage to le Carré, author of Tinker Tailor Soldier Spy, who died aged 89 in December 2020.

In a statement, the CSIS added that, “The tweet was a simple tribute to acclaimed spy novelist, David Cornwell, who wrote many books and recently passed away… [it] goes without saying that we encourage individuals who are interested in pursuing a career in security and intelligence to do so to protect their country and keep their fellow Canadians safe.”

The agency may have wanted to opt more for a reference to the works of Ian Fleming rather than John le Carré.

For those not in the ‘No’… erm, know, ‘A Perfect Spy’ details the exploits of a double agent, Magnus Pym, who lies to his family, betrays his country and [Spoiler alert] ultimately takes his own life at the end of the novel. It is unclear whether the CSIS was attempting to communicate that the employment opportunities were for such, literal, dead-end jobs.

Avid readers, apparently boasting more than the requisite attention to detail required for a job at the Canadian spy agency, were unflinching in their scathing responses.

“A Perfect Spy (1986) by British author John le Carré is a novel about the mental and moral dissolution of a high level secret agent.”

“What kind of a spy do I have to become to make the bad tweets stop,”wondered another.

“So potential Canadian spies should be inspired by the tale of someone who worked as a double agent and betrayed his country? This is most intriguing – what are you trying to tell us here?”questioned another.

The timing of the gaffe was less than ideal, as hundreds of workers at the Canadian Communications Security Establishment, its foreign intelligence and cybersecurity agency, went on strike amid growing fears of attack during the pandemic.