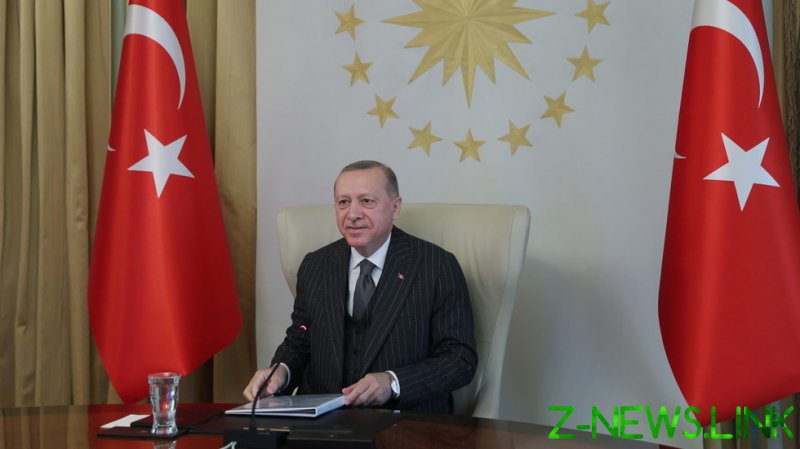 Erdogan’s statement comes despite Turkey’s status as a NATO member, with Ankara appearing to take the side of Moscow over Washington.

“Biden’s statements about Mr. Putin are not fitting of a president, and a president coming out and using such remarks against the president of a country like Russia is truly unacceptable, not something that can be stomached,” Erdogan said, according to Reuters.

“In my opinion, Mr. Putin has done what is necessary by giving a very, very smart and elegant answer.”

On Wednesday, Biden told ABC News that Moscow would “pay the price” for allegedly interfering in the 2020 US elections in favor of his opponent, Donald Trump.

Furthermore, when asked by anchor George Stephanopoulos if the Russian leader is “a killer,” the US president agreed.

“When I was a kid, when we were arguing with each other in the playground, we used to say, ‘Whatever you say [about others] is what you are yourself,'” he said.

Later that day, Putin also proposed a live-streamed discussion with the US president, suggesting as possible topics the fight against the Covid-19 pandemic, regional conflict resolution and strategic stability issues.

“I think it would be interesting for the people of Russia and the people of the United States and many other countries,” he said.

Despite Ankara’s status as a member of NATO, Putin and Erdogan have a close working relationship. In recent months, they have teamed up to create a joint monitoring center in Nagorno-Karabakh following the Azeri-Armenian war of 2020. In February, Turkey purchased Russian S-400 missiles, becoming the first NATO state to do so. Last week, following a video conference between the two presidents, Putin and Erdogan announced they would be cooperating on building a power plant in the Turkish province of Mersin.