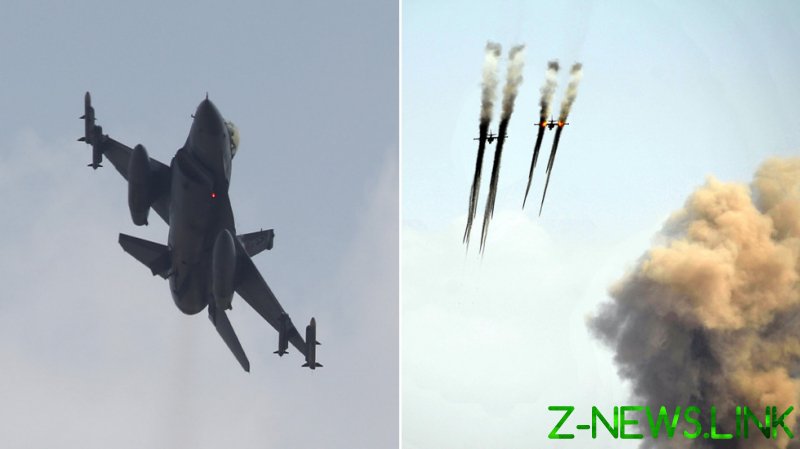 Officials in Yerevan said the incident took place in Armenian airspace and that the pilot of the Su-25 pilot was killed.

The attack comes hours after Ankara said that it would help Azerbaijan repel “Armenian aggression,” offering both diplomatic and military assistance. Armenia said earlier that it was prepared to use Russian-made Iskander ballistic missiles in the disputed Nagorno-Karabakh region if Turkey deploys its American-built F-16 fighter jets in support of the Azeri offensive.

Also on Monday, the leader of the disputed Nagorno-Karabakh region, Arayik Harutyunyan, alleged that local forces had shot down what he said was a Turkish F-16. Vagif Dargyahly, a spokesman for that country’s fefense ministry dismissed his claim, describing it as “lies and provocation,” and adding “you can’t destroy what doesn’t exist.”

The government of Armenia claimed that the Turkish F-16 took off from an airbase inside Azerbaijan.

A spokesman for Turkish president Recep Tayyip Erdogan denied Yerevan’s claim to Bloomberg. Azerbaijan’s defense ministry has also denied that a Turkish F-16 jet has shot down an Armenian warplane.

Fighting between Armenia and Azerbaijan broke out on Sunday, after Azeri and ethnic Armenian soldiers exchanged fire. The region of Nagorno-Karabakh is internationally recognized as part of Azerbaijan but is populated by ethnic Armenians. Baku considers the enclave to be illegally occupied by Yerevan.

Both sides have accused one another of killing civilians. The longtime rivals have also engaged in a propaganda war, posting videos allegedly showing military hardware that they destroyed on the battlefield.

Baku has repeatedly argued that Turkey is not involved in any hostilities in Nagorno-Karabakh. However, officials in Ankara have publicly supported the Azeri cause, pledging “full support” and calling on Yerevan to vacate the “occupied” lands.