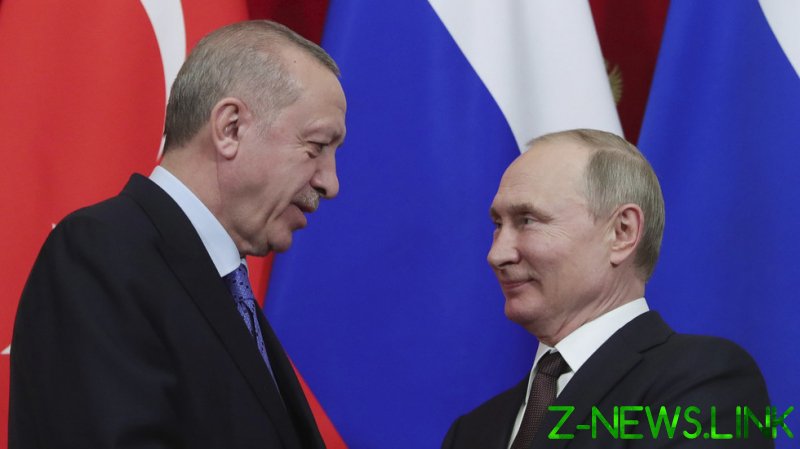 The meeting comes just a week after Erdogan expressed frustration at talks with his NATO ally, US President Joe Biden, and announced that he would instead try to build closer ties with Russia. The Turkish leader felt that the discussions in New York went badly. The fact Ankara is a key member of the US-led NATO military bloc, of course, means the situation could have geopolitical ramifications.

Speaking ahead of the encounter, which will be held in the southern Russian city of Sochi, Kremlin Press Secretary Dmitry Peskov revealed that the agenda for the summit will focus extensively on foreign policy issues. In particular, the talks will cover Syria, which has seen clashes in recent days between Ankara-backed rebel fighters and Russian forces supporting the government of President Bashar Assad.

On Tuesday, Bloomberg reported that Erdogan plans to ask for Moscow’s support in the region, protecting Turkish troops and brokering an agreement that would see key strongholds given up by Kurdish militias in northern Syria. The Turkish leader has previously said he has “serious expectations” for progress to be made in the negotiations.

Regional security in Central Asia is also slated for discussion, given both leaders have expressed concerns about the potential for destabilization following the withdrawal of American troops from Afghanistan. In addition, the pair are set to cover the growing political crisis in Libya, where elections billed for later this year have divided Western backers of the government and sparked fears of a return to open conflict.

According to the Kremlin, Putin and Erdogan will also consider a range of bilateral issues, including economic and diplomatic partnerships between Russia and Turkey. Erdogan has previously said Ankara is seeking to boost trade turnover with Moscow to at least $100 billion.

Speaking on Sunday, the Turkish leader said that his country is considering placing another order for Russia’s advanced S-400 anti-aircraft rocket launcher, despite facing sanctions from the US over previous purchases. “In the future, nobody will be able to interfere in terms of what kind of defense systems we acquire, from which country at what level,” he said.

Erdogan also turned fire on Washington following talks with Biden, in which he said insufficient progress was being made on key issues. “In the discussions with Mr. Biden that I’d been anticipating, there wasn’t the desired outcome,” he said. “As two NATO countries, we need to be at a different point.”

“America is not fighting terrorist organizations enough, it is giving them a lot of weapons and equipment,” he added, saying that his country would instead “strive to further bilateral relations with Russia.”

Moscow and Ankara have a complicated relationship, with both regular disagreements and cooperation. For example, despite Russia selling S-400s to Turkey, they have been on opposite sides of the Syrian civil war.

Another disagreement comes in the form of Crimea, which Ankara refuses to recognize as part of Russia. Last week, Erdogan told gathered world leaders at the 76th session of the UN General Assembly that Turkey supports “Ukraine’s territorial integrity and sovereignty, including the territory of Crimea, whose annexation we do not recognize.”