Turkey’s Erdogan launches construction of Istanbul canal megaproject, says it will be completed in six years 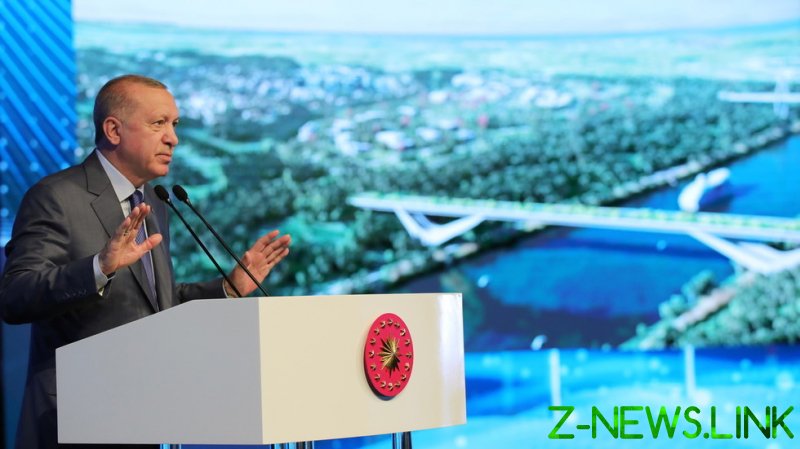 The groundbreaking ceremony for the canal, set to link the Black Sea and the Sea of Marmara, was held on Saturday at a construction site of one of the six bridges across the future waterway. The ceremony was attended by Turkey’s president, Minister of Transport and Infrastructure Adil Karaismailoglu, and other top officials.

“Today, we are turning a new page in Turkey’s development by laying the first stone in the construction of the first bridge across the Istanbul Canal, which will be 45 kilometers in length, at least 275 meters wide and 21 meters deep,” Erdogan stated.

The minister of transport did not mince his words either, claiming earlier in the day that the future canal will “bring Turkey to a leading position in world economic corridors” and ultimately “will shape the world’s economy and trade” leaving its mark on history.

The project is expected to be completed in just six years, with the first year and a half primarily focusing on ‘preparation’ works. The project’s official price tag currently stands at the $15 billion mark, according to Erdogan. The costs have already grown significantly from the earlier estimates of $9.2 billion – while independent experts had projected the real costs to be several times higher, reaching as much as the truly eye-watering sum of $65 billion.

The controversial project, first floated in the early 2010s, has been repeatedly criticized by various parties in Turkey, as well as from abroad. Apart from the massive price tag, critics have raised concerns over its potential environmental impact, warning that the artificial waterway may damage local ecosystems, pollute the Sea of Marmara and taint groundwater.

The country’s authorities, however, have brushed off such concerns, with Erdogan describing it as the “most environmental project in the world.” The president insisted that the canal would actually ‘save’ the city of Istanbul from the impact of the ever-growing maritime traffic, as well as accidents associated with it.

“We regard Kanal Istanbul as a project to save the future of Istanbul,” the president said during the groundbreaking ceremony, adding that some 45,000 ships pass through the Bosporus yearly. “Projections show that this number will reach 78,000 in 2050.”

The canal project has been also criticized from the geopolitical standpoint, with its opponents warning that Turkey might end up in the middle of a big war instead of reinforcing its international position. The new artificial waterway will not be a subject of the 1936 Montreux Convention, the cornerstone treaty that regulates Ankara’s sovereignty over the Straits. The agreement strictly limits the tonnage of military ships belonging to nations from other regions allowed to enter the Black Sea.

Earlier this year over 100 ex-navy officers signed an open letter voicing concerns over the project, warning Ankara against the canal construction for security reasons. The letter invoked a furious reaction of Turkey’s government, with multiple retired admirals ending up arrested for signing the letter. The government, which is still searching for people allegedly linked to the botched 2016 coup, described the letter as an inadmissible attempt by the military to interfere with the civilian authorities.