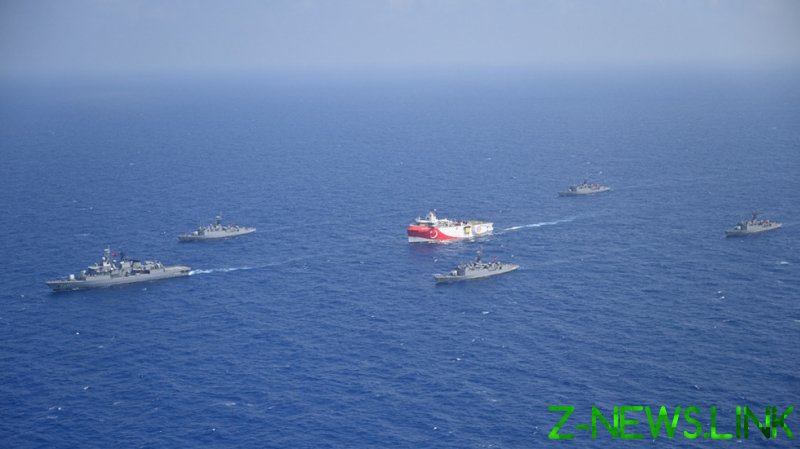 Speaking during a news conference on Tuesday, Turkish Foreign Minister Mevlut Cavusoglu said that Ankara has always been ready for negotiations and blamed Athens for the lack of any meaningful talks between the two countries.

“If you are open to solving our existing issues through dialogue, we have always been open [to it],” Cavusoglu stated. “Unfortunately, because our calls have not been heeded… we took the necessary steps in the field and at the table.”

The already cold relations between the two old rivals – and NATO allies – have rapidly deteriorated over the course of the past few weeks after Ankara began maritime exploration of oil and gas in the contested eastern Mediterranean. Turkey’s claims have been bolstered by an agreement it reached with Libya’s UN-backed government last year, yet the maritime deal has been rejected by Greece and other nations.

On Monday, Ankara prolonged the mission of its Oruc Reis survey vessel, which is currently in the disputed waters between Crete and Cyprus.

The extension of the mission caused an angry reaction in Athens, which earlier in the day condemned Ankara’s activities. Greece accused Turkey of not willing to engage in dialogue as well, urging it to “desist from its daily rants” and “work for security and stability” in the region instead.

Indeed, apart from angering Greece, Turkey’s exploration mission has definitely ruffled some feathers on the international stage. Another NATO ally, France, has expressed its support for Greece and even dispatched a military flotilla to the region to reinforce its statement.

On Monday, following a meeting with his German counterpart, Heiko Maas, French Foreign Minister Jean-Yves Le Drian condemned Turkey’s actions as “completely unacceptable,” and called on the EU to produce a strong coordinated response to them.

“The EU is ready for dialogue. If strong condemnation and sanctions are necessary, the EU would use them… The EU mobilized all diplomatic efforts to prepare for a constructive dialogue with Ankara. Germany and France have agreement on this issue,” Le Drian warned.