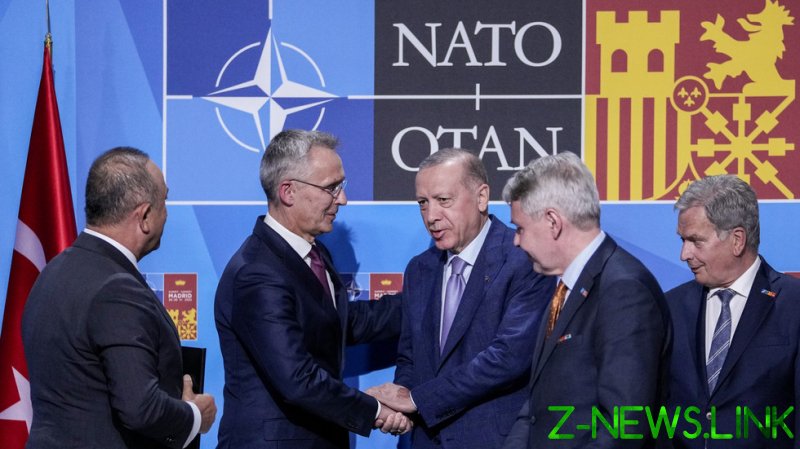 Turkey will support inviting Finland and Sweden into NATO at the alliance’s upcoming summit in Spain, Finnish President Sauli Niinisto announced on Tuesday after a meeting with his Turkish counterpart Recep Tayyip Erdogan and Swedish Prime Minister Magdalena Andersson.

The three countries signed a memorandum of understanding at the meeting, organized with the support of NATO Secretary General Jens Stoltenberg.

“The concrete steps for our accession to NATO will be agreed among NATO allies over the next two days, but that decision is now imminent,” said Niinisto. “I am pleased that this stage on Finland’s journey towards NATO membership has been completed.”

According to Turkey, Finland and Sweden pledged to “condemn terrorism in all its forms” and end their support for organizations Ankara has designated as terrorist – including the Kurdish groups PKK and YPG, as well as the movement led by the exiled cleric Fetullah Gulen, which the Turkish government refers to as FETO.

“Turkey got what it wanted,” Erdogan said in a statement after the deal was announced.

Speaking at a press conference after the meeting, Stoltenberg said that Finland and Sweden will become observers in NATO at the upcoming summit. He added that the memorandum includes provisions on fighting terrorism and arms exports, including adopting stricter national legislation.

Finland and Sweden imposed an arms embargo against Turkey in 2019, over Ankara’s intervention in Syria. Turkey also reportedly demanded that Stockholm and Helsinki shut down the offices and ban the publications belonging to FETO, freeze the assets related to groups it has designated as terrorists, and even ban them from demonstrating in public.

Ankara’s opposition threatened to derail NATO’s plan to invite Sweden and Finland at the summit in Madrid which began on Tuesday. The two traditionally neutral Scandinavian countries declared their desire to join the US-led alliance in April, citing the current conflict in Ukraine.