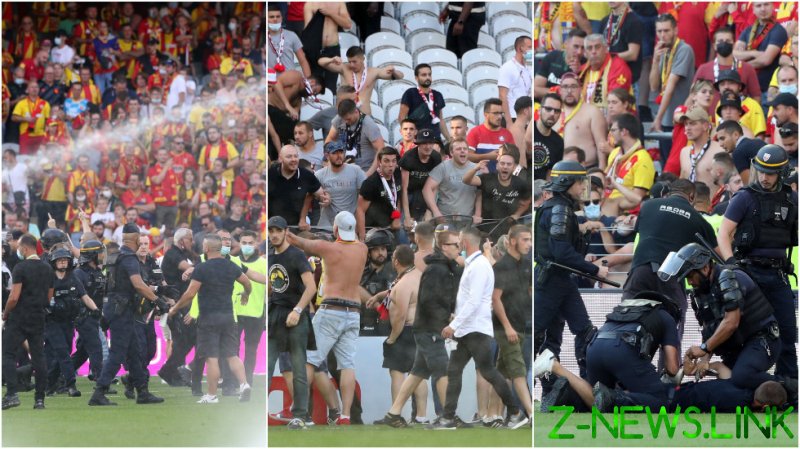 A menacing group of fans broke onto the pitch where the Ligue 1 match against Lille was being held and headed towards the away end in search of a scrap, forcing riot police to form a defensive line and pin some supporters to the turf in a troubling fracas.

The derby between the high-flying hosts and last season’s champions did not suffer the same fate as the clash between Nice and Marseille in August, which was abandoned when a huge fight broke out after midfielder Dmitri Payet was hit by a bottle.

A 90-minute delay did take place while order was restored, with the match resuming at 5.30pm local time.

“Two minutes before the invasion, Lille supporters provoked the Lens [fans] by pretending to climb over the gates,” reported French journalist Amine Mohamed, who shared footage of the anarchy.

“Lens supporters crossed the pitch towards the visitors’ stand. Just before, Lille threw projectiles over the grid which separated them from Lens supporters.”

A supporter and a police officer were injured, according to RMC via Get French Football News.

“The second half kicks off with riot police lined in front of the stands,” the outlet reported. “These kinds of scenes are now becoming a weekly occurrence in Ligue 1.”

New Lille manager Jocelyn Gourvennec claimed his players were unaware of the turmoil taking place at the Estadio Bollaert-Delelis.

“We had already returned to the locker room,” he said of an afternoon that was described as “a derby to forget” by the club after Przemyslaw Frankowski’s 74th-minute winner for Lens.

“I don’t really know what happened. We were informed by the delegates and Mr [referee Benoit] Millot, who received the coaches and captains.

“It was just a bit long. It lengthened half-time and we had to do a warm-up again, which was not ideal. I do not know more. I hope there were no injuries.”

The chaos is likely to result in further punishments after football chiefs in France last week sanctioned both clubs involved in the previous violent trouble.

Among the verdicts from that shameful episode, Nice were docked a point and told to play their next home match behind closed doors, and the club’s physio was banned for nine months for punching a supporter.