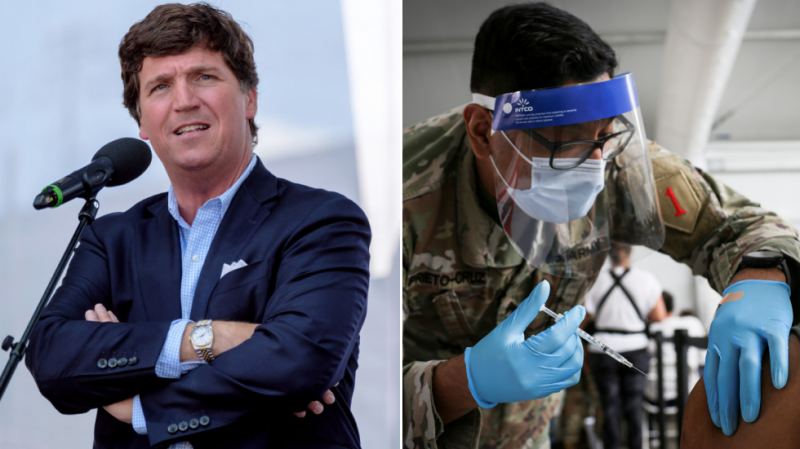 On Monday evening, conservative Carlson took aim at the Pentagon’s recently introduced vaccine mandate for all active-duty service members. He suggested that Joe Biden’s government had a dark reason for pushing the Covid-19 shots on US troops – and it wasn’t just about inoculation from the virus.

The Fox host goes on to claim that the rest of the US military presentation is not as shocking but is full of ‘falsifications’, including that only three people died after taking a vaccine. However, the information provided in the slideshow does appear consistent with reported deaths in the US.

Instead of the vaccine mandate for what he claimed were fit and healthy Americans, Carlson said the Biden administration should be focusing on suicides in the armed forces. He cited Department of Defense figures which show that only 46 members of the armed forces have died from Covid-19, while there were 377 military suicides in 2020.

Carlson’s comments came as the US death toll from Covid-19 hit 675,000 on Monday. The Pentagon mandated the Pfizer vaccine for all active service personnel in late August after the Food and Drug Administration (FDA) granted the jab its full approval.

The Covid-19 shot is actually the 18th vaccine mandated by the Pentagon for its forces. However, a single service member is unlikely to have had all of them as many are location-specific.

While some agreed with Carlson, with videos of his monologue widely shared on social media, others were quick to slate the host as a conspiracy theorist and suggested he is likely vaccinated himself – though he has refused to confirm it one way or another.

CNN political analyst Joe Lockhart was less diplomatic, going so far as to tweet that Carlson was an “enemy of the state.”

Carlson is the most-watched cable news host in the US, averaging 3.3 million viewers in August.