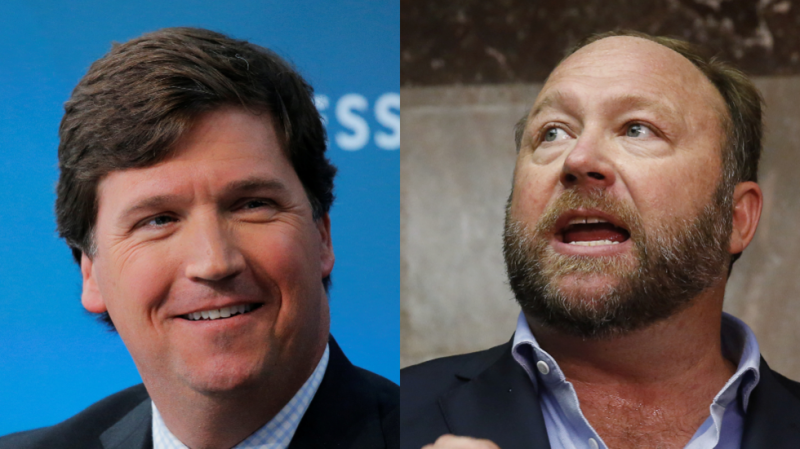 As CNN’s chief media critic, Stelter regularly focuses his attention on Carlson, who he’s branded an icon of “white male rage and resentment,” a “conspiracy theorist,” and “the new Donald Trump.” Audiences don’t seem to care, however, and ‘Tucker Carlson Tonight’ pulled in around 2.8 million viewers every night in June, compared to the 786,000 who tuned in to Stelter’s ‘Reliable Sources’, which has lost viewers every month since President Joe Biden took office. Though the two host shows at different times, they are both seen as representatives of their networks’ political stances.

Darcy agreed, and after Stelter played another clip of Carlson defending Jones, and Jones praising Carlson’s work, he asked Darcy “Are these two guys in cahoots? Are they friends, do they communicate… are they bros, what do we know about their relationship?”

“It does sound like they’re talking to each other,” Darcy responded, before the pair took turns savaging the “far-right conspiracy theories” that both men apparently believe in.

“They might differ a little bit in antics and the way they deliver their message, but that message to viewers is consistent, and it’s pretty identical.”

Jones, a fiery polemicist and conspiracy theorist, has long been branded as ‘crazy’ by mainstream pundits. Indeed, few other right-wing commentators came to his defense when he was banned from every major internet platform in 2018, for various violations of their speech policies. Yet the same accusations leveled at Jones by Stelter and his colleagues before his banning are now being leveled at Carlson. Several establishment-friendly commentators have already called for Carlson’s deplatforming, but Fox News has thus far stuck by its star host.

With Stelter left to seethe on TV, some pundits and commenters pointed out the irony of the CNN host calling anyone else out for spreading “conspiracy theories,” after the network enthusiastically spread baseless theories regarding Donald Trump’s supposed links to Russia for four years.