Trying to sugarcoat it? Basketball announcer blames DIABETES for dropping N-word bomb on high school girls who took a knee 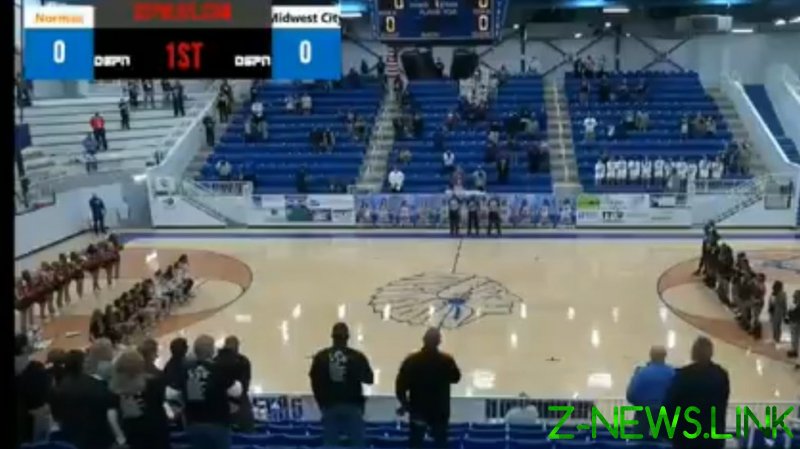 Broadcaster Matt Rowan was caught on a hot mic venting his disgust at the decision by Norman High School players to drop to one knee before their game against Midwest City in Sapulpa on Thursday.

“They’re kneeling? F***ing n*****s,” a muffled Rowan was heard saying on an NFHS Network stream. “I hope Norman gets their ass kicked. F**k them. I hope they lose. They’re gonna kneel like that?”

The racist comments went viral as social media users condemned Rowan for the remarks – although the announcer has now attempted to put them down to his blood-sugar levels.

“I will state that I suffer Type 1 Diabetes and during the game my sugar was spiking,” Rowan said in a statement.

“While not excusing my remarks it is not unusual when my sugar spikes that I become disoriented and often say things that are not appropriate as well as hurtful. I do not believe that I would have made such horrible statements absent my sugar spiking.”

In follow-up comments to TMZ, the 44-year-old said “[the N-word] should never be thought much less muttered.”

“I want to take ownership of my actions. Never my intention to hurt anyone. I am sickened by what I said. I am so sorry for what I said.”

Rowan, who owns and operates the streaming service OSPN, has already been stood down for the remainder of the tournament, while Norman High School Superintendent Nick Migliorino condemned the comments and supported students’ right to kneel.

“We condemn and will not tolerate the disgusting words and attitudes of these announcers,” he said.

“We will do everything in our power to support and uplift our team and everyone affected by this incident.”

“My heart aches for the young female athletes who were subjected to this hateful and disgusting tirade,” he added.

“Funny how, while facing adverse health, whether it’s alzheimers, using adderall, or high blood sugar, these people default to showing their hate for black people,” wrote one Twitter user.

“These weak a** apologies shouldn’t be accepted,” fumed another response.

“If this guy is truly sorry, he needs to kneel when the anthem is played, on his own, in public, every time it is played for the rest of his life. The ridicule he will hear & deal with…oh well, black people deal with it everyday. ….diabetes my a**,” claimed another.