Home / WORLD / Trump’s reign has proved the US president is merely a figurehead. Does it really matter who wins the vote?

Trump’s reign has proved the US president is merely a figurehead. Does it really matter who wins the vote? 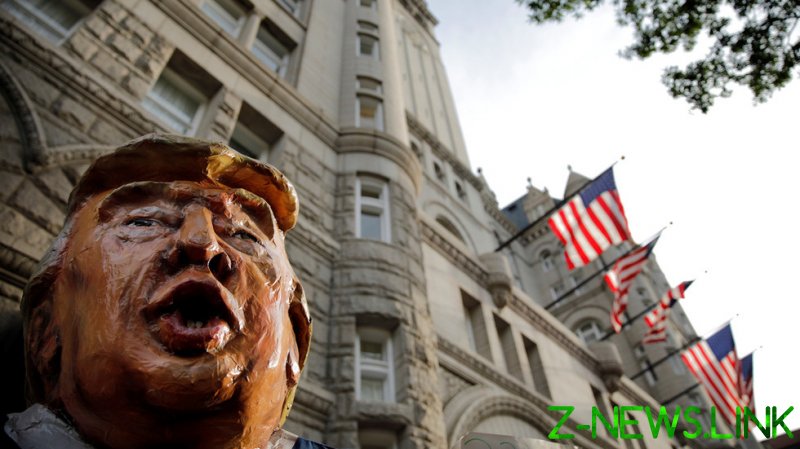 Love him or hate him, President Donald Trump has done more than any other politician this century to pull up the curtain on the entrenched political interests that really run Washington, drawing them out of the shadows to defend what they believe is their turf against the spray-tanned barbarian at the gates. Between his uncouth mannerisms and his alarmingly sane policy promises, Trump in 2016 broke all the unwritten rules of being president, leaving his Deep State nemeses to pick up the pieces and try to put them back together.

Four years later, Trump has been largely neutered, his media crucifixion and lamentably orthodox term a cautionary tale to all future presidents who might try to buck the system. The powers that be no longer need to assassinate a troublesome president – it’s far easier (and less messy) to kill their spirit. Trump has not ended any wars (indeed, he’s dropped more bombs on more civilians than superhawks George W. Bush and Barack Obama), nor has he drained the Washington ‘swamp’ of lobbyists, career politicians and think tank goons (unless you count appointing them to his cabinet as ‘draining’).

Instead, he’s cut taxes for the rich, rolled back the regulations that kept Big Business from polluting America’s air and water, and given away the store to Israel, even assassinating one of its most powerful enemies, the Iranian Quds Force Commander Qassem Soleimani.

While some of his supporters no doubt love those latter policies, these are the kind of ‘wins’ any other president would secure to please his wealthy masters – hardly the actions of a maverick like Trump fans believe their hero to be. The square peg has been stuffed into the round hole. Trump has become a creature of the establishment that (ironically) still hates him, even as he blusters about locking some of them up.

Indeed, what’s probably the most ironic aspect of the nail-biting coverage of the still-undecided 2020 election is how similar a Joe Biden administration would be to Trump’s.

The US would remain at war in Syria and Afghanistan, continue trying to provoke war in Iran and needling Russia (probably China too, since Biden would be wary of seeming ‘soft’ on the foreign entity he’s said to be controlled by), maintain its practice of bending over backwards to service Israel, and keep screwing its own working class out of a decent standard of living.

Progressive Democrats who held their nose and voted for Biden out of the misguided belief they would be able to drag him to the left once in office will feel awfully stupid when, as president, he governs as he did as Obama’s sidekick. The tear-jerking specter of ‘kids in cages’ arose from Obama’s immigration policies, after all – he wasn’t called the “deporter in chief” for nothing – and Biden was a fervent cheerleader for the five wars and thousands of drone strikes his boss launched. It was Obama whose 2012 decree made it legal to detain a US citizen indefinitely, anywhere, without habeas corpus under the aegis of fighting terrorism, and Biden whose 1994 crime bill has packed American prisons with black and brown men guilty of non-violent (and in some cases, shockingly minor) crimes.

Yet the establishment media narrative has cast the Biden campaign as crusaders for social justice and equality – so opposite the ‘racist’ and ‘misogynist’ Trump campaign that it comes with a woman of color as vice president in Kamala Harris.

Trump hasn’t helped, claiming that the former California attorney general, who loved mass incarceration so much she wanted to lock up the mothers of truant kids, is a radical leftist. A Biden campaign would be a Trojan horse for socialism, the right has wailed, even though Biden is so chummy with Wall Street he far outstripped the president in donations from the financial sector. How many Wall Street donors did democratic socialist Bernie Sanders attract when he was running? Exactly.

Four years of Trump has made abundantly clear that while presidents are allowed to talk tough and promise the moon, the minute they try to actually put those crazy policies into action – by bringing troops home, making nice with geopolitical rivals, or choking off the cross-border flow of cheap illegal immigrant labor – the not-so-invisible hand of the Deep State intervenes. There’s always a ‘chemical weapons attack’ that can be staged to keep a lucrative war going, and opposition research firms have plenty of disgruntled Russian PR execs on speed dial willing to spin up fantastic stories about lascivious hotel romps. Those kids in cages will be thrown in people’s faces until the president gets his mind right about borders, too – it doesn’t matter who built the cages.

The president’s role is merely to serve as the pretty face explaining away the ugly reality of empire – which explains why Trump has rankled the establishment so deeply. When your ‘pretty face’ is a walking caricature of the Ugly American, other countries’ ruling classes don’t take you seriously. It also explains why Trump initially appealed to so many Americans – it was voters’ chance to drop a giant turd in the geopolitical punchbowl, sticking it to their ruling class oppressors in a way they seldom get the opportunity to do.

A Biden presidency will appear calmer on the surface, as the former VP is not interested in upending the established order – something he made abundantly clear decades ago. The media might even start reporting that the country has turned the corner in the Covid-19 pandemic, that the economy’s disastrous self-inflicted gunshot wound to the foot is healing, that it’s ‘morning in America’ again.

But millions of Americans will still be out of work, hopelessly in debt, threatened with eviction, and forced to watch impotently as their infrastructure crumbles and their tax dollars are shoveled into the Pentagon’s furnace to pay for more war. Attempts to complain online will be mercilessly censored – just as they are now, despite the president’s bloviating about repealing social media platforms’ Section 230 liability protections. But individual Americans will be told they’re the only ones who don’t like the shiny new coat of paint hiding the rot.

Neither ‘side’ will concede without a fight, and whoever is ultimately named the victor, the other’s supporters will almost certainly take to the streets and make a mess. Under Biden, these riots will be denounced as extremist violence; under Trump, they will be hailed as peaceful manifestations of democracy. As with Obama’s election in 2008, any ‘resistance’ to Trump’s excesses will evaporate immediately if Biden wins, even as he commits the same excesses in service to the same ruling class. And if Trump wins? Get ready for more of the same, America.