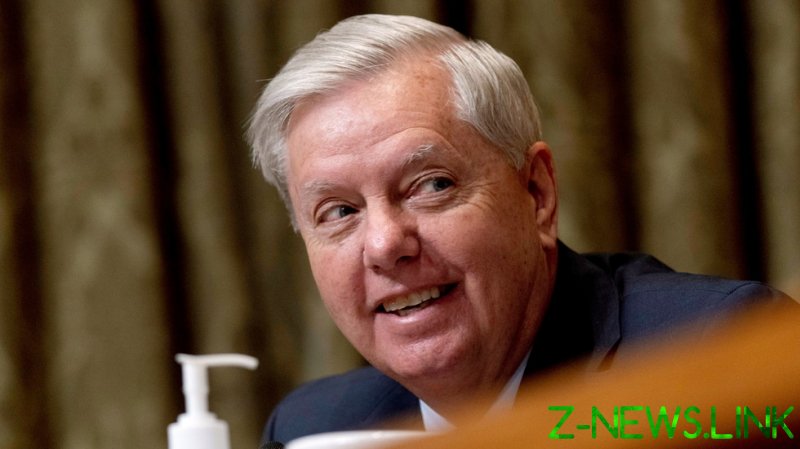 Organized by a former staffer for Donald Trump, the ‘Justice for J6’ rally aims to draw thousands of participants to Washington, DC on Saturday to show solidarity with the supporters of the former president who have been charged and jailed for taking part in the riot on Capitol Hill on January 6.

Graham has little sympathy for their cause. He has largely avoided echoing Trump’s claims that Joe Biden’s electoral victory last year was fraudulent, and the South Carolina senator told the New York Times on Wednesday that DC police shouldn’t hesitate to use force on the demonstrators if necessary.

“They need to take a firm line, buddy,” Graham told the Times. “If anybody gets out of line, they need to whack ’em.”

Graham’s sentiment has changed little since January, when he voted to certify Biden’s victory and described Trump’s address to his supporters immediately before the riot as “the problem, not the solution.” Trump, he said at the time, “tarnished” his legacy by supposedly encouraging his followers to storm the Capitol.

Despite vocally opposing Trump’s candidacy in 2016, Graham presented himself as a steadfast ally of the president after Trump’s shock victory over Hillary Clinton that year. While Graham reliably pushed back on Trump’s efforts to cut US troop numbers in the Middle East, he aggressively backed all of the former president’s judicial nominees, eagerly waded into conservative culture wars, and counselled Trump throughout two Democrat-led impeachment drives against him.

Nevertheless, Graham has long been viewed with suspicion by Trump’s base. His reluctance to end foreign wars and aid spending clashed with Trump’s “America First” mantra, and earlier this week he stoked anger on the right by defending Gen. Mark Milley. The chairman of the Joint Chiefs of Staff reportedly coordinated with top Democrats, the CIA, and the NSA to monitor the “rogue” Trump after the January 6 riot, and had reached out to his Chinese counterpart before and after the 2020 election, to reassure him the US wasn’t about to attack.

Graham is not the only Republican viewing Saturday’s protest with a dim eye. As security fencing went up around the Capitol, a number of Republican lawmakers told the New York Times that they were either ignoring or distancing themselves from the demonstration.

Trump himself has said he views the protest as a “setup” that the news media will use to demonstrate either a “lack of spirit” among his supporters if few attend, or an excuse to harass the demonstrators if a crowd shows up. As such, Trump will spend the day at a golf tournament in New Jersey, before jetting back to his post-presidential retreat in Mar-a-Lago, Florida.