Home / WORLD / Trump warns no federal contracts to firms who outsource to China & threatens to DECOUPLE US economy…without losses?

Trump warns no federal contracts to firms who outsource to China & threatens to DECOUPLE US economy…without losses? 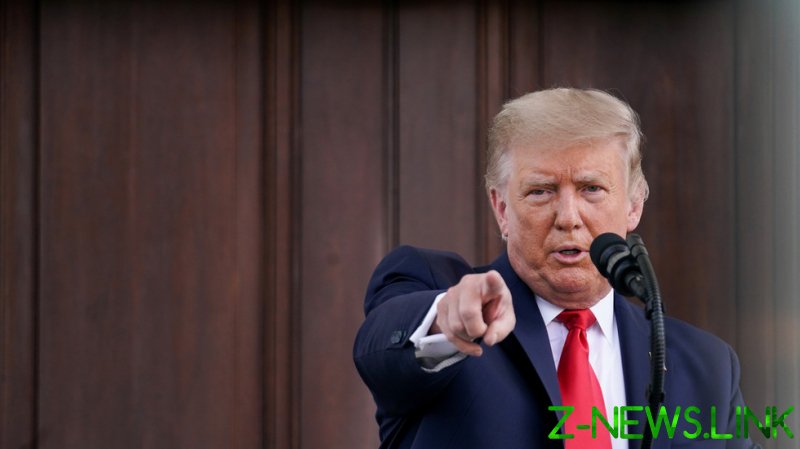 The president added that his administration was working on seven “fair trade deals,” complaining the US was being ripped off by friend and foe alike. He even named some of those wayward “friends,” pointing the finger at Europe and bragging he’d saved American taxpayers billions by making the US’ transatlantic allies pay for NATO. “They rip us off on the military, and they rip us off in the European Union on trade,” Trump marveled.

The president hit on some familiar topics, promising “unprecedented prosperity” through tax cuts, and blaming the “China virus” for the country’s economic pratfall earlier this year – a crash several members of Congress appeared to have advanced knowledge of. Trump hailed the US’ “energy independence” and warned “your stocks, your 401ks” would crater if Democratic candidate Joe Biden was elected, arguing his rival’s “$4 trillion tax hike” would create “a crash the likes of which you’ve never seen before.”

Trump reminded reporters that economic shutdowns like the ones states imposed for Covid-19 lead to immense death “on the other side,” not officially from the pandemic, citing “countless deaths from suicide, substance abuse, depression, heart disease and other various illnesses.” Doctors in parts of the US have already acknowledged suicides outnumbering pandemic deaths, as have countries like Australia.

The commander-in-chief also addressed what critics have termed his broken promises to “end the wars,” claiming that “one cold-hearted globalist betrayal after another” had stopped him from bringing American troops home from Syria after “defeating” the Islamic State terror group (IS, formerly ISIS/ISIL). While arguing the rank-and-file military were big Trump fans, he claimed it was the Pentagon brass who didn’t like him. “All they want to do is fight wars” to feed the military-contracting beast, Trump sniped.

While Trump’s anti-China rhetoric implies the US is acting of its own free will, China has also threatened to dump its nearly $1.1 trillion in US treasuries on the market, warning Washington to stop interfering in its international commerce, as tensions rise between the two countries. As Trump excoriated his rival’s supposed servitude to Beijing, the White House YouTube feed cut out, only returning during reporters’ questioning of the president.