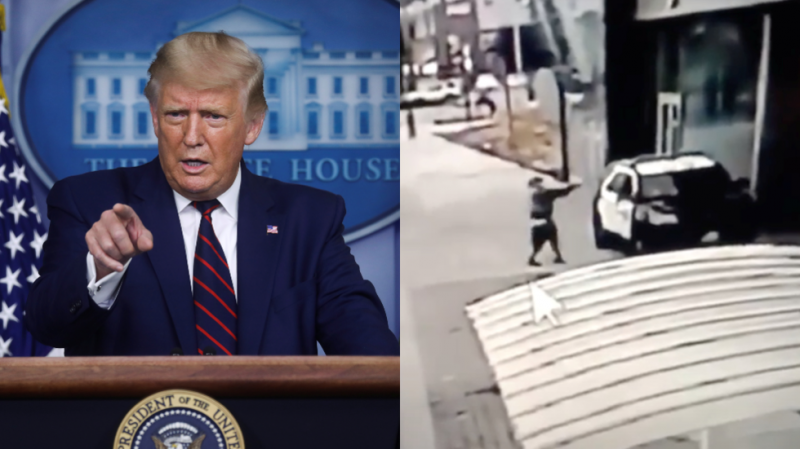 Two Los Angeles County Sheriff’s Department deputies were shot in their car near a metro station in the city of Compton on Saturday. Video footage shared by the sheriff’s department shows the shooter approaching the vehicle and opening fire “without warning or provocation.”

The two deputies were taken to hospital in critical condition, and underwent surgery late on Saturday night. As they fought for their lives, a crowd of protesters descended on the hospital’s emergency room, with some outside chanting“we hope they die.” According to a tweet from the sheriff’s department, the protesters blocked entries and exits to the hospital, and were eventually dispersed, with two arrested after a scuffle with officers.

President Donald Trump was livid. “If they die, fast trial [and] death penalty for the killer,” he tweeted on Sunday. “Only way to stop this.”

If the deputies did die and the killer was caught and tried, California law would allow for the death penalty. However, nobody has been executed in California since 2006, and Governor Gavin Newsom issued a moratorium on executions last year. Capital punishment can be ordered by the federal justice system, but in practice, most death sentences are handed down by state courts.

Trump often takes to Twitter to demand the executions of particularly heinous criminals. Last month he urged federal prosecutors to “again seek the death penalty” for Boston marathon bomber Dzokhar Tsarnaev, after his death sentence was vacated in May. Before becoming president, Trump called for the execution of Islamic State (IS, formerly ISIS) terrorists, cop killers, mass shooters and pedophiles.

“Got to do something about these missing children grabbed by the perverts,” he tweeted in 2012. “Too many incidents – fast trial, death penalty.”

In another pro-execution tweet, Trump once mused that a killer who beheaded a woman in Oklahoma should suffer “the same fate – beheading?”