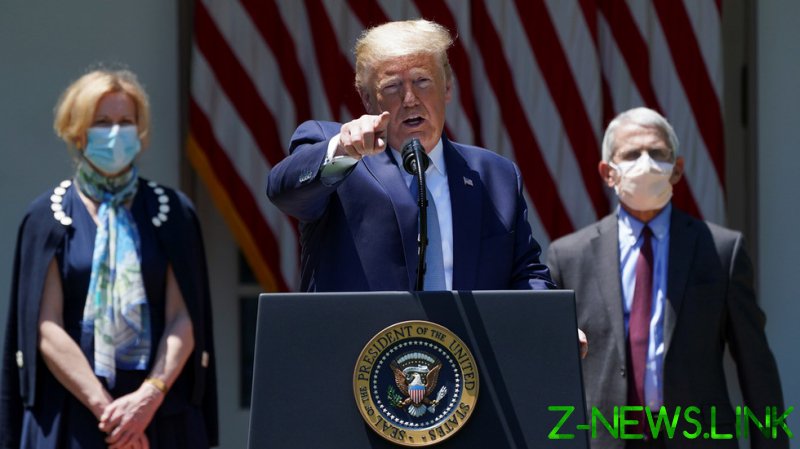 Fauci and Birx were “two self-promoters trying to reinvent history to cover for their bad instincts and faulty recommendations,” which he “almost always overturned,” Trump said in a statement released on Monday evening.

Fauci is the “king of ‘flip-flops’ and moving the goalposts to make himself look as good as possible,” the 45th president said, pointing out that the director of the National Institute of Allergy and Infectious Diseases “spent US money on the Wuhan lab in China – and now we know how that worked out.”

Birx is “a proven liar with very little credibility left,” according to Trump, who called her recommendations for coronavirus mitigation “pseudo-science.” He also claimed that Fauci would always “talk negatively about her” and even refuse to be in the same room.

“She was a very negative voice who didn’t have the right answers,” Trump said of Birx, describing her as a “terrible medical advisor, which is why I seldom followed her advice.”

If it were up to Fauci and Birx, Americans would “currently be locked in our basements as our country suffered through a financial depression,” Trump said, adding that he only kept them around because “they’re like a bad habit” and had worked for the government for so long he couldn’t get rid of them.

Monday night’s tirade came after CNN aired a documentary over the weekend, in which Birx claimed that any deaths after the first 100,000 “could have been mitigated or decreased substantially” if the Trump administration had “aggressively applied the lessons of the first surge.”

In the same documentary, Fauci claimed that the decision to launch Operation Warp Speed and commit to developing a vaccine “may have been the best decision that I’ve ever made.” He also described Trump’s April 2020 tweet that states should be “liberated” from harsh lockdowns as something that “hit me like a punch to the chest.”

Trump wasn’t the only one to push back against the doctors’ testimonies. His White House chief of staff, Mark Meadows described them as “revisionist” and “disingenuous” in an appearance on Steve Bannon’s ‘War Room’ podcast on Monday.

Judging by the social media backlash after CNN aired the documentary, Birx has not won over the Democrats, as they continued to blame her for “enabling” Trump’s coronavirus response. The same group has given Fauci a free pass, however, downright fetishizing him as “America’s doctor” and somewhat of a saint, especially after he became the chief coronavirus adviser to new President Joe Biden.

“He’s a better pitcher than he is at what he does,” Trump said in a phone interview with Fox News host Laura Ingraham on Friday, referring to Fauci’s infamous first pitch at the start of the 2020 baseball season. Trump had previously called out Fauci for “perhaps the worst first pitch in the history of baseball” during the run-up to the 2020 election.

Some 400,000 Americans died between the Covid-19 outbreak last March and Biden’s inauguration on January 20 this year. The US has registered another 149,892 deaths attributed to the virus since.