Home / economy / Trump took revenge on India for s-400, but ran into a counter punch

Trump took revenge on India for s-400, but ran into a counter punch 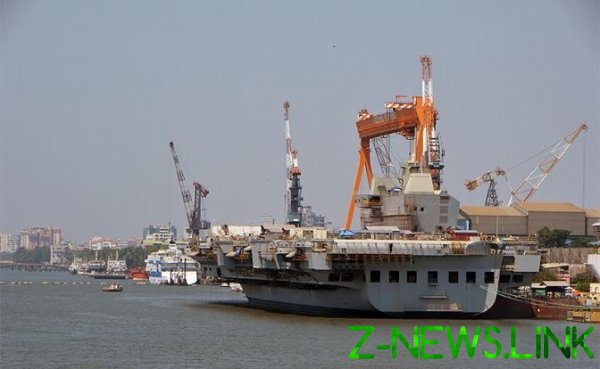 India decided to impose duties on 28 products made in America. So the authorities responded to the recent decision of Donald trump to make changes to the list of countries that enjoy benefits under the General system of preferences (Generalized System of Preferences).

“I decided that India has assured the United States that it will provide equitable and reasonable access to its markets, — said in a statement the White house. Accordingly, it is advisable to stop finding India in the list of developing countries beneficiaries from June 5, 2019”.

Trade relations between the two countries escalated last year, when trump signed a decree on introduction of import duties on steel and aluminum. The new rates are affected, including the interests of India — one of the world’s largest steel producers. Her government threatened the Americans retaliatory restrictive measures, but did not dare to implement them on the background of active negotiations with Washington.

In the end, instead of the cancellation fees India received another blow. Washington it takes responsibility for the outbreak of trade wars. According to Secretary Mike Pompeo, United States, is ready to settle trade disputes with India, achieving greater access of American companies to its markets, but new Delhi has shown intransigence.

The intention to deprive India of preferences Donald trump announced in March. The reason for the standard: in this country do not normally work with American producers. However, the White house, there are other reasons to punish recalcitrant partner: the example of Ankara, new Delhi decided to purchase from Russia the s-400 system worth over $ 5 billion. During one of meetings with journalists trump promised that India will regret this.

Indians of the American pressure, it seems, do not bother. They count profit from the imposition of duties, which should be approximately $ 217 million. In global trade the US war against the rest of the world there is a new wing.

This, however, does not mean that the negotiation process has stalled. Quite the contrary: this month, Pompeo is going to visit India, and trump to meet with Prime Minister Narendra modi on the sidelines of the G20 summit in Osaka. Therefore, new Delhi has decided to strengthen its bargaining position. And Americans need to understand what dialogue they will have with a strong player.

— The United States is to be congratulated, says the Russian economist, the head of the Center for political and economic studies at the Institute for new society Vasily Koltashov. — When Donald trump proclaimed a return to protectionist policies (perhaps not declaring it right), it meant not only the American fracture. Protectionism returns the whole world. And if someone is not returned, then it is either a donkey, or has a super-strong positions.

See also:  Hesitated: in Russia did not respond to trump's statement about Putin

The introduction of duties India shows the extent to which the US can count on it. The last couple of years, Washington was looking for and even achieved a certain symbolic rapprochement with her. But India makes it clear that it intends to conduct independent economic policies. And how would the United States nor flirted with her in the struggle against China, they must recognize that India is as big a player as China. The same large economy that may still not fully realize its potential.

The US is no longer the center of decision-making in the global economy. On the contrary, now they will have to adapt to the decisions of others. And all strong States (including India) will protect the interests of domestic producers. All that Americans have to admit.

“SP”: — Can we say that now India and China are actually on the same side of the barricades — in a camp of opponents of the United States?

— Not quite. Their contradictions have not gone away. These countries largely are in the same segment. India is even more advantageous position in the production of goods that require a large amount of human labor. She has a tremendous amount of remarkably loyal and disciplined workforce.

Despite the difference of interests, India and China will still try to find a common language. And USA can not use their contradictions, and the introduction of fees demonstrates that.

Submissive partner, which the Americans have in the face of poles, Ukrainians, Balts, they will not be able to find in the face of Indians. Nothing like! India will buy weapons from Russia (not China, which she is afraid — here’s a great trust is impossible). To enter prohibitive duties when necessary.

And note that nobody remembers about the existence of the WTO. This organization died, all the most important issues are without looking at her. The world is back to normal neomercantilist practice.

But we must understand that there is an element of pressure on the United States. Yes, India understands that Washington will not allow her to take the place of Chinese in the American market, because the tramp cherishes a domestic producer. But the sight on this market remains. India would like to sell a huge number of products in the United States.

Perhaps the Americans will have to negotiate with her and to make concessions.

Only the European Union reported that in the future will refuse payments in dollars in trade relations with Russia. That is USA here are losing positions.

“SP”: — it is Clear that China is ready to “butt heads” with the United States. A is the Indian economy to withstand the onslaught of the Americans, if trump will go on the offensive?

— India stand. The situation is rather unfavorable for the US, because they have lost Pakistan. When we see on the shelves of Russian Pakistani tangerines, don’t be surprised. It’s part of a rather strange but effective economic and political rapprochement between Russia and Pakistan. But Pakistan has long been ally of the United States.

Will not forget, where were the military bases of the Islamists during the stay of our troops in Afghanistan. Pakistan received from the Americans a lot of money, but he was out of control, lost confidence in “uncle Sam”. Since the United States began working more closely with India.

It may happen that Pakistan, India and Iran agree, and the United States will not be able to set them against each other. You can saber-rattling, but immediately found that Americans hold only the ocean — the waters around Eurasia. And economic processes on the continent they do not control.

To put pressure on India is very difficult — it will have to negotiate. Most likely, the Indian government on this count. They need a bargain. “Okay, we can keep your soy, but you will get more our products of light industry”.

They want to get such benefits, which received China, when Richard Nixon agreed with Mao Zedong. So began the process of restructuring China actually led to the present success of China.

The American market is still very attractive. And to be attractive to large-scale devaluation of the dollar. Then, perhaps, the priorities of India will change. But she is now trading, so no need to overdo it with the geopolitical insights.