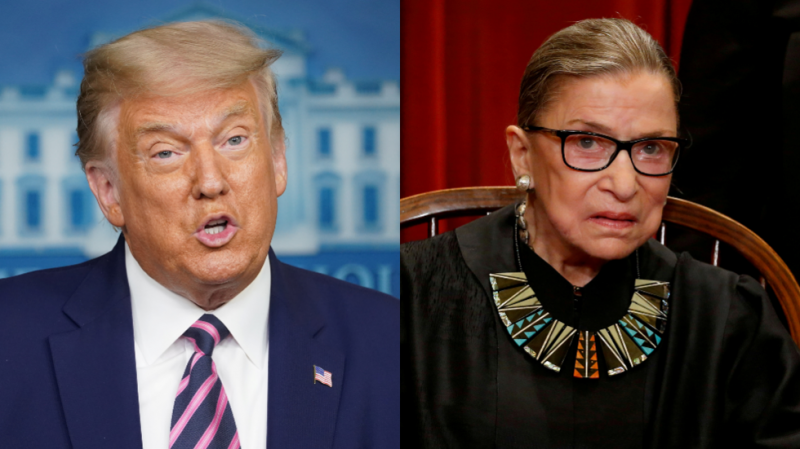 “We were put in this position of power and importance to make decisions for the people who so proudly elected us, the most important of which has long been considered to be the selection of United States Supreme Court Justices,” Trump said on Saturday in a tweet addressed to his party.

“We have this obligation, without delay!” he added.

Ginsburg’s death came just days after Trump announced a list of potential Supreme Court nominees. Among the most likely candidates are Amy Coney Barrett and Amul Thapar, both of whom were selected for appeals court positions by Trump in 2017.

Whoever Trump nominates, Senate Majority Leader Mitch McConnell has vowed to bring the president’s choice to a vote in the Senate, where the GOP holds a 53-47 majority. However, a number of Republican senators have come out against holding confirmation hearings before November’s election, and should three defect, McConnell’s plans could be jeopardized.

Senate Democrats vocally oppose confirming a new justice before November. In a statement following Ginsburg’s death, Minority Leader Chuck Schumer said that “The American people should have a voice in the selection of their next Supreme Court Justice. Therefore, this vacancy should not be filled until we have a new president.”

Ginsburg herself released a statement immediately before her death, saying “my most fervent wish is that I will not be replaced until a new president is installed.”

Should Trump press ahead with replacing Ginsburg, the confirmation process will likely be a highly contentious one. Democrats are already furious at McConnell’s determination to hold a Senate vote, especially as he refused to do so when Justice Antonin Scalia died nine months before the 2016 election. McConnell justified his refusal to fill Scalia’s seat by pointing to the fact that Barack Obama was a ‘lame duck’ president at the time, with both houses of Congress held by the GOP.