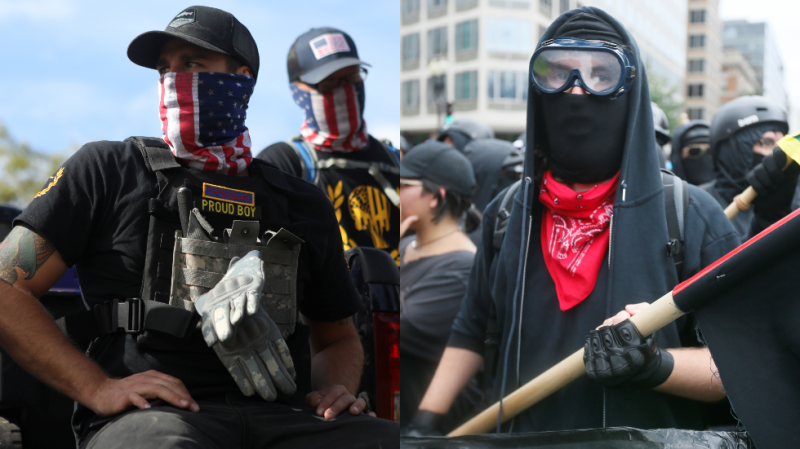 Asked by moderator Chris Wallace whether, as leader of his party, he had called Oregon’s Democrat governor or Portland’s Democrat mayor to advise them on ending more than three months of violent protests, Biden said, “I don’t hold public office now. I’m a former vice president. I made it clear that violence should be prosecuted.”

READ MORE: ‘I am the Democratic Party,’ Biden declares, making Trump and Twitter cringe: ‘Not according to Harris’

Wallace pointed out that earlier in the debate, Biden had said “I am the Democratic Party right now,” and asked him again whether he had called leaders in Democrat-run Portland to offer guidance.

“They can, in fact, take care of it if he [Trump] just stays out of the way,” Biden said.

Wallace then turned to Trump, asking if he would condemn white-supremacist and militia groups to help discourage violence.

“Who would you like me to condemn? Proud Boys? Stand back and stand by,” Trump replied. “But I’ll tell you what. Somebody’s got to do something about Antifa and the left because this is not a right-wing problem. This is a left-wing problem.”

Biden interjected, saying “Antifa’s an idea, not an organization. That’s what his FBI director said.”

“You know what, he’s wrong,” Trump shot back. “Antifa is a dangerous, radical group. You ought to be careful of them. They’ll overthrow you.”

The violent riots that the Trump administration has been blaming on the radical leftist activists have accompanied the Black Lives Matter protests, which spread across the country after the May 25 death of George Floyd in Minneapolis police custody.

Trump has clashed with city and state leaders in Democrat-run areas as they resisted his efforts to send more federal forces to help quell the violence. While accusing Trump of inciting the unrest, Democratic politicians, including Biden’s running mate Kamala Harris, have encouraged the racial protests.

It wasn’t until after the Democratic convention that Biden and other Democrat leaders first spoke out against the violence.