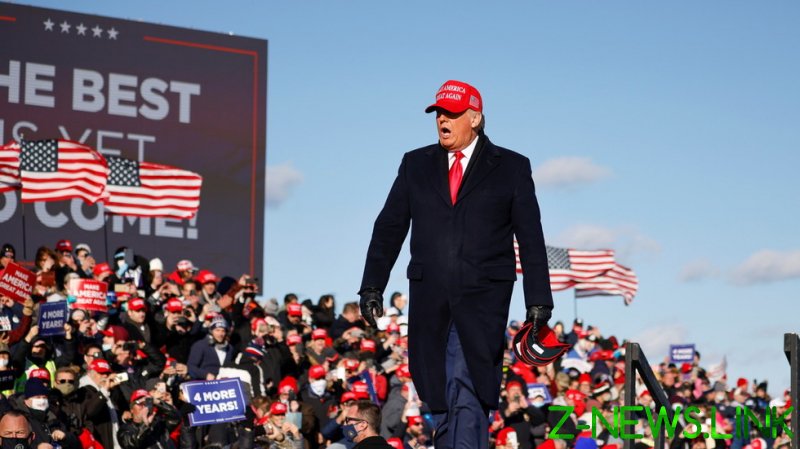 While Trump initially kept a low profile after departing the White House for Florida, he has made a growing number of statements and public appearances in recent weeks. Sitting down to an interview on Tuesday with his daughter-in-law, Lara Trump, the former president got straight down to brass tacks.

After boasting of his achievements and claiming that Democrats utilized a “third-world country voting system” to push President Joe Biden over the line to victory, Trump told listeners that he would hold one of his signature campaign-style rallies in the near future.

“In fact, we’re thinking about doing one relatively soon just to let everybody know that there’s hope in the future,” he said.

Should Trump follow through and make an attempt at retaking the White House, these rallies would be instrumental in that effort. In the closing stages of the 2020 campaign, he held multiple rallies every day for weeks on end, at one point putting in five appearances in five states in 24 hours.

A presence on social media would also be essential. Before and during his presidency, Trump relied on platforms like Twitter to communicate with the public directly, and often to attack the media for its negative coverage of him. However, Trump was banned from every major social media platform after his supporters rioted on Capitol Hill in January, with the tech companies blaming the event on Trump’s rhetoric.

In his typical fashion, Trump described Twitter as having become “boring” without him, telling Lara that people were allegedly leaving the platform in droves.

Though Trump launched an official political website this week, and has a social media platform of his own in the works, his excommunication from the digital sphere remains a serious obstacle to reaching the public beyond his dedicated supporters. Lara Trump’s interview, for example, was not posted to YouTube, but to Rumble, a free-speech focused alternative. YouTube has deleted other interviews with Trump, and outright banned any videos claiming that the 2020 election was fraudulent

In an Instagram post on Tuesday night, Lara Trump revealed that the interview had been pulled from Facebook and Instagram, as it apparently violated the ban imposed on Trump in January. An email from Facebook, shared by Lara, stated that “further content posted in the voice of Donald Trump will be removed and result in additional limitations on the accounts.”

Trump decried the digital blackout during his interview, but claimed that he’s managing to “get the word out” just fine with press releases. Moreover, 54 percent of Republican voters favor Trump for 2024, according to a poll published last month. Former vice president Mike Pence came in a distant second with 12 percent.