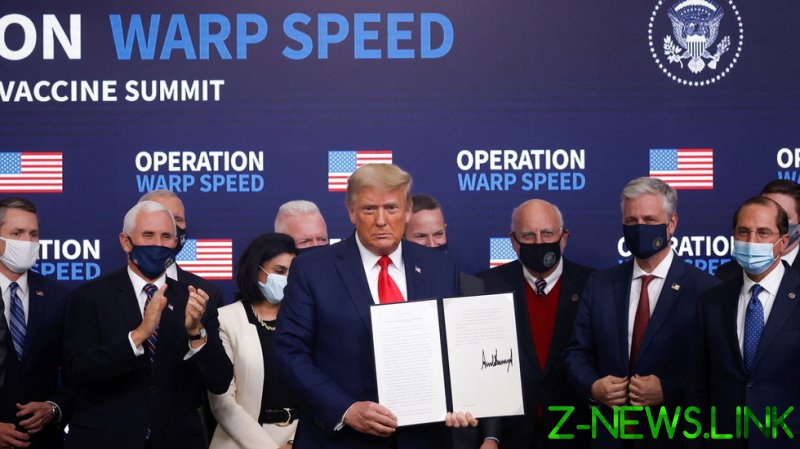 Speaking to Fox News on Saturday night, Trump boasted that he was “tremendously proud” of the role he played in developing safe and effective vaccines to fight Covid – a process that typically requires more than a decade.

“I think if we didn’t come up during the Trump administration with the vaccine, you could have had 100 million people dead, just like you had in 1917,” Trump said, referring to the Spanish flu pandemic.

Although the vaccines are a “tremendous thing,” they should not be forced on people, the former president added.

“I really believe in somebody’s choice, somebody’s freedom,” said Trump. “I’m a big fan of our freedoms, and people have to make that choice for themselves.”

He also highlighted the importance of in-person learning for students, arguing that, for all age groups, “being in school is much better than looking at a computer screen.” The social isolation caused by remote learning will end up “scarring” America’s young people, Trump warned.

In May 2020, Trump announced the launch of Operation Warp Speed, a program that funneled around $18 billion of taxpayer dollars into the coffers of pharmaceutical companies tasked with creating Covid-19 vaccines. Several companies involved in the scheme went on to develop vaccines in record time, including Johnson & Johnson, AstraZeneca, and Moderna. The program was also used to pay for an advance-purchase order from Pfizer, totaling $2 billion, for 100 million doses of its vaccine for use in the United States.

Although the program began under Trump, the Biden administration was tasked with rolling out the country’s nationwide inoculation drive. Ironically, many top Democrats, including Biden and his vice president, Kamala Harris, claimed that Americans’ distrust in Trump would hurt the credibility of the vaccines.

Last month, Trump made similar accusations about the Democratic president, arguing that Americans are hesitant to get the shot because they “don’t trust” Biden’s administration.

The White House announced on Friday that half the total US population has been fully vaccinated against the virus.

However, while boasting about the inoculation drive’s success, Biden announced that “350 million Americans have already been vaccinated” –  a number considerably larger than the current US population, which is estimated at only around 331.4 million people.