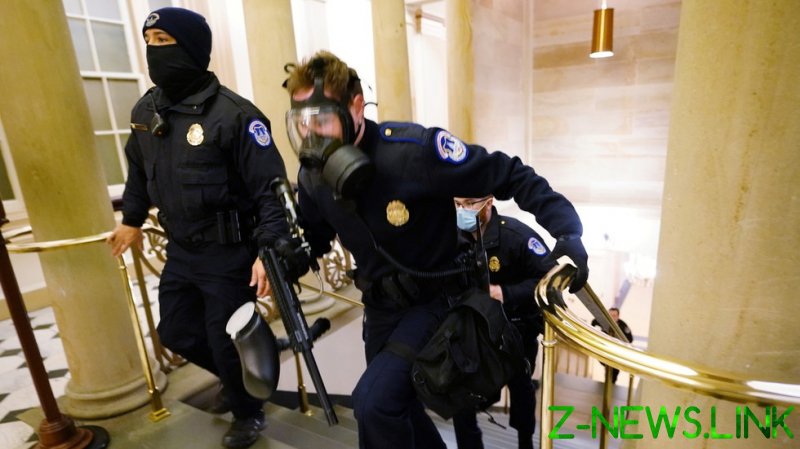 Capitol Police have locked off the Senate chamber and have guns drawn as protesters are pounding on the doors and reportedly vandalizing the building.

Reporters and lawmakers have taken to social media to update the situation and say they have been instructed to lay down on the floor in-place.

Rep. Dan Kildee (D-Michigan) claimed in a tweet that he and others were told to don gas masks.

While unconfirmed, there have been multiple reports of shots fired inside the Capitol, with House Minority Leader Kevin McCarthy (R-California) saying in a Fox News interview he heard the call “shots fired” over a Capitol Police radio.

“You do not do what is happening right now. People are being hurt. This is unacceptable,” he said.

Other images show protesters setting off fire extinguishers and abandoned offices as employees have attempted to hide from the rioting demonstrators. Conservative reporter Elijah Shaffer shared an image allegedly from Nancy Pelosi’s office with emails still up on a computer screen, suggesting those previously occupying the space left in a hurry.

President Donald Trump, who previously gave a speech to the crowd saying he will “never concede” the election to Joe Biden, took to Twitter to urge calm and support for “Capitol Police and law enforcement.”

A curfew has been called in Washington DC due to the chaos at the Capitol. The protests come on the same day Congress is set to certify the Electoral College vote in Biden’s favor. While many, including Trump, expressed hope that Mike Pence would challenge these “fraudulent” votes, the vice president released a statement earlier on Wednesday saying he does not have the legal authority to do so.