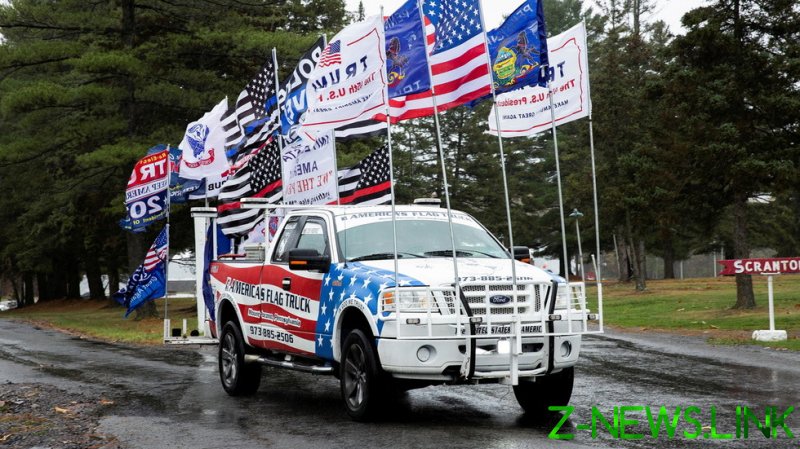 Promoted on social media by Trump’s supporters, the #MillionMAGAMarch is being billed as “the biggest Trump rally in history.” The march is supposed to gather thousands of Trump supporters together at Washington, DC’s Freedom Plaza at noon, to protest what they see as a fraudulent election.

Hours before the event, journalist Heshmat Alavi filmed a convoy of pickup trucks bound for DC. Shot at an unknown location, the video showed traffic at a standstill, as pickup trucks decked out in US flags and ‘Make America Great Again’ banners inched toward the capital.

Right-wing pundit Dan Bongino posted a video on Thursday which apparently showed a massive convoy of truckers heading for DC to join the rally.

In Los Angeles on Friday, Republican Congressional candidate Errol Webber posed for pictures with a crowd of Californian Trump supporters, who were taking a five-hour flight to join the protest.

The protest itself was organized by a range of Republican and pro-Trump groups, each of whom invited their own speakers. These guests range from GOP Reps. Louie Gohmert (Texas), Mike Kelly (Pennsylvania) and Paul Gosar (Arizona), to conservative journalists Jack Posobiec and Mike Cernovich. Controversial right-wing speaker Alex Jones is expected to attend too, with his InfoWars co-host Owen Shroyer organizing a “caravan” of followers to drive to DC from Austin, Texas.

Trump himself said that he “may even try to stop by and say hello,” before reiterating his claim that last week’s election was “rigged.”

He has accused Democrats of fixing the election in several swing states, through a mix of computer “glitches,” illegally counting late-arriving ballots, and excluding Republican observers from polling places to doctor ballots in favor of Biden. The president has not conceded to Biden, and has launched a flurry of lawsuits, which his campaign intends to fight up to the Supreme Court.

Saturday’s rally is also expected to draw left-wing counter-protesters, and DC Police Chief Peter Newsham told Fox 5 on Friday that his force is standing by to keep the peace.