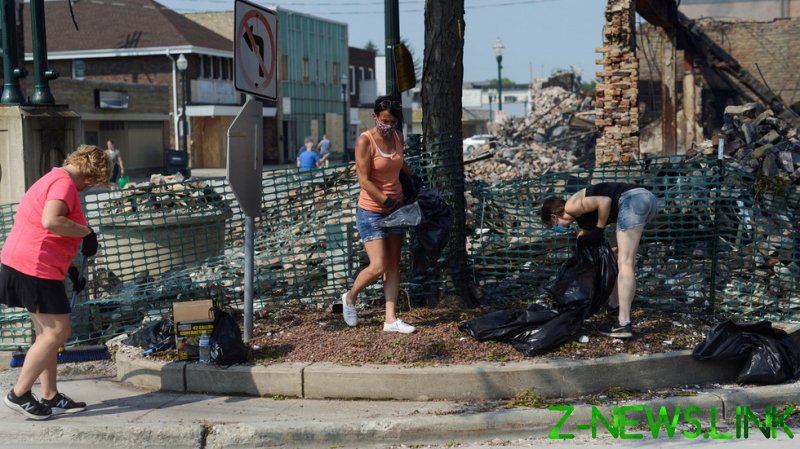 The president announced he was deploying “federal law enforcement and the National Guard to Kenosha, [Wisconsin] to restore LAW and ORDER!” via Twitter on Wednesday, explaining he had just gotten off the phone with State Governor Tony Evers.

Trump’s statement came just hours after the Kenosha County Board begged Evers for “1,500 National Guard members with police powers” to be sent into the county, warning that the city was on the brink of annihilation after three nights of rioting. However, a press release from Evers’ office suggested that just 500 federal troops – a third of the requested manpower – were being sent to Kenosha.

While Evers had declared a state of emergency on Tuesday and deployed 250 National Guard servicemembers to protect “critical infrastructure,” Kenosha officials argued this was insufficient to protect the city, as rioters put local businesses to the torch and two were left dead amidst the melee on Tuesday night.

The gunman believed responsible for those deaths, 17-year-old Kyle Rittenhouse from Illinois, was arrested and charged with first-degree murder on Wednesday morning. Having returned to his home state, he was accused of fleeing Wisconsin “with intent to avoid prosecution” for the shooting. A third shooting victim was hospitalized with non-life-threatening injuries. However, the circumstances of the shooting remain murky, with some witnesses insisting he was a white supremacist and others claiming he was there to protect property.

Protests erupted in Kenosha on Sunday night after police shot Jacob Blake, an unarmed black man, seven times in the back, leaving him paralyzed. The demonstrations have continued nightly since, often degenerating into rioting and violence, and video posted to social media shows local business owners taking up weapons to protect their property from the mob. Clashes with police have led to exchanges of tear gas, bricks, and other projectiles, while arsonists reportedly set over three dozen fires in the first two days alone.

Blake’s family have come forward to express their “disgust” at the violence. His mother, Julia Jackson, urged would-be troublemakers not to “burn up property and cause havoc and tear your own homes down in my son’s name.”