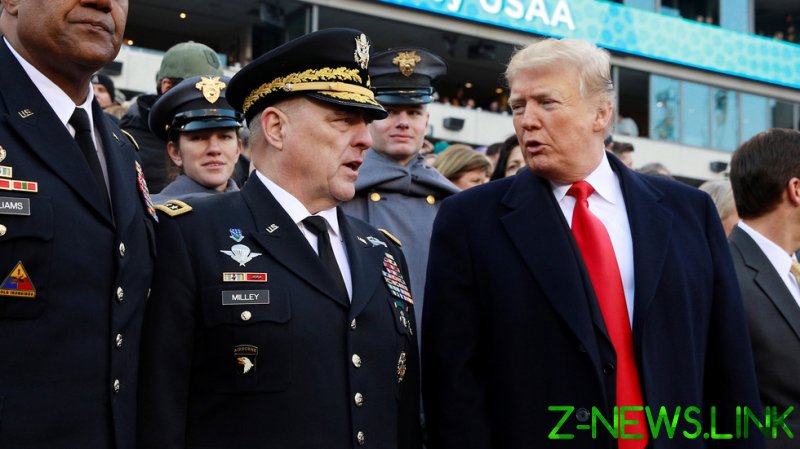 “If the story of dumba** General Mark Milley, the same failed leader who engineered the worst withdrawal from a country, Afghanistan, in US history… is true, then I assume he would be tried for treason,” Trump said in a statement on Tuesday. He noted that the general would have been giving Beijing notification of an attack, if the report were true. “Can’t do that,” he said.

Trump’s comments came in response to news reports on ‘Peril,’ a new book by Washington Post writers Bob Woodward and Robert Costa, which said Milley was concerned that the then-president might launch a “rogue” attack on China during his final days in office.

Milley, chairman of the Joint Chiefs of Staff, reportedly called a “secret meeting” at the Pentagon to limit Trump’s ability to lash out militarily, telling officers in charge of the National Military Command Center not to take orders from anyone unless they go through him first. The meeting came two days after the US Capitol riot, and the general supposedly feared an unhinged president would even consider a nuclear strike on China.

“No matter what you are told, you do the procedure,” Milley allegedly said at the meeting. “You do the process, and I’m part of that process.” The general reportedly called his Chinese counterpart to offer secret promises that he would give advance warning of any attack, and he directed intelligence officials to spy on the Trump White House.

Trump said the story was fake, “concocted by a weak and ineffective general together with two authors who I refused to give an interview to because they write fiction, not fact.” Still, he added that “Actions should be taken immediately against Milley, and better generals in our military – of which we have many – should get involved so that another Afghanistan disaster never happens again.”

Trump took credit for crushing the Islamic State (IS, formerly ISIS) “caliphate,” which he said Milley argued couldn’t be done. He added that he’s also the only president in decades who didn’t get the US into a new war.

“For the record, I never even thought of attacking China, and China knows that,” Trump said. “The people that fabricated the story are sick and demented, and the people who print it are just as bad.”

Under Milley’s leadership, Trump said, the Pentagon let $85 billion of US military equipment fall into the hands of the Taliban. The chaotic withdrawal left American troops dead and wounded, and US citizens were left stranded in Afghanistan.

Trump called for Milley to resign or be fired in June, saying the general lied about an alleged June 2020 confrontation with the then-president to “impress the radical left.” He also called Milley pathetic for defending the teaching of critical race theory at the US Military Academy at West Point.

Trump lashed out at Milley again in July, after reports said the general took steps to prevent the then-president from engineering a coup to hold onto power after losing last November’s election to Joe Biden.