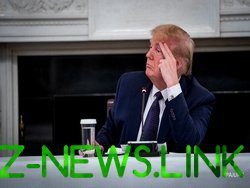 Meanwhile, the government of Lebanon has informed that the explosion 2,700 tons of ammonium nitrate in the port of the capital occurred during welding work.

The US President Donald trump called the explosion in the port of Beirut “monstrous attack”. He stated this at a briefing at the White house on Tuesday, August 4.

“I’ve met some of our great generals. <…> They seem to think that it was an attack. It was some kind of bomb, Yes. It looks like a monstrous attack,” – said the American leader.

His statement trump made, despite the fact that the preliminary cause of the emergency in the Libyan capital is the explosion of 2,700 tons of ammonium nitrate during welding operations in a port warehouse.

“The United States stands ready to help Lebanon. We have a very good relationship with the people of Lebanon. We will be there to help,” said trump told reporters.

As reported, after an explosion in the port of Beirut, the Supreme defense Council of Lebanon has declared the capital a disaster area.