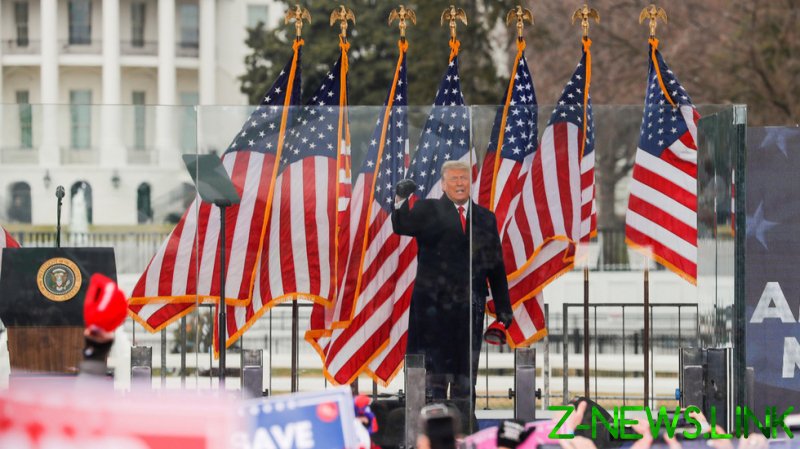 Attorneys Bruce Castor and David Schoen, representing the 45th president, sent a 14-page brief sent to the Senate on Tuesday also challenging the article of impeachment as a violation of Trump’s due process rights, the US Constitution’s explicit prohibition on bills of attainder, as well as factually wrong on the merits.

While the Democrat-led House met and voted on the single article of impeachment on January 13, when Trump was still president, the charges weren’t sent to the Senate until last week – days after Joe Biden replaced him in the White House. Trump’s lawyers argued that a trial before the Senate would be moot and “patently contrary to the plain language of the Constitution.”

Moreover, trying to bar Trump from holding future office under the 14th Amendment – originally used to disenfranchise Confederates after the Civil War – is “irrelevant” because it is conditioned on his removal from office, which cannot happen for the simple reason Trump isn’t in office any more, the lawyers said.

They also argued it would amount to a Bill of Attainder, explicitly prohibited under Article 1, Section 9 of the Constitution. It is the same article Democrats have invoked to accuse Trump of accepting foreign “emoluments” during his presidency, which was thrown out as moot by the Supreme Court last week.

Denying any wrongdoing alleged in the eight “averments,” the lawyers also challenged the fact that the House Democrats improperly crammed multiple charges into a single article, and deprived Trump of his due process rights by holding no hearings or giving him an opportunity to respond.

Democrats have accused Trump of “inciting insurrection” by claiming there were irregularities with the 2020 election and telling protesters outside the White House on January 6 to “fight like hell.” The impeachment claims this directly led to the unrest at the Capitol, when protesters disrupted the joint session of Congress.

Denying the charge, Trump also said the US Constitution and Bill of Rights “specifically and intentionally protect unpopular speech from government retaliation.”

If the First Amendment protected only speech the government deemed popular in current American culture, it would be no protection at all.

Trump’s lawyers also pointed out that the chief justice of the Supreme Court will not preside over the Senate trial as is custom, but that a Democrat senator – who will also be a juror – will do so, in a breach of all norms and precedents. The Senate should throw out the impeachment as moot, and if not, acquit Trump on merits, the lawyers concluded.

While ten Republicans voted with the Democrats to impeach Trump on January 13 – and four abstained – it would take a two-thirds majority in the Senate to actually convict him. Though the vote on the constitutionality of the process forced by Sen. Rand Paul (R-Kentucky) last month failed, it showed only five Republicans were willing to cross the aisle on the issue, suggesting that the Senate is unlikely to have the votes to convict.

Trump is the only US president to be impeached twice. The Democrat-dominated House impeached him the first time in December 2019, for alleged “abuse of power and obstruction of Congress” regarding a phone call with the president of Ukraine. The Senate acquitted him in January 2020, in a vote mostly along partisan lines. Sen. Mitt Romney (R-Utah) joined the Democrats in voting yes on one of the articles, becoming the only senator in US history to vote for the impeachment conviction of a president of his own party.