Home / WORLD / Trump puts to rest concern he will split Republican Party, hints at 2024 run: ‘I may even decide to beat them FOR A THIRD TIME’ 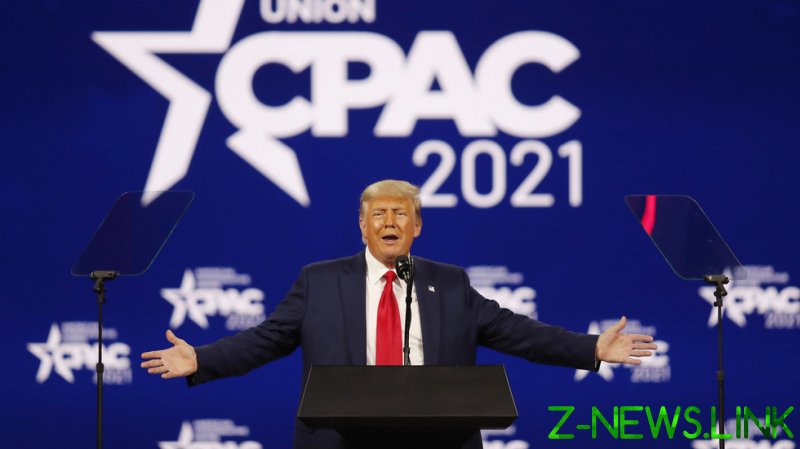 “I’m going to continue to fight right by your side,” Trump said Sunday at the CPAC conference in Orlando. “We will do what we’ve begun right from the beginning, which is to win. We’re not starting new parties… We have the Republican Party. We’re are going to unite and be stronger than ever before.”

Trump stopped short of declaring he will run for office again, but he set off a huge ovation by hinting at a 2024 run. “Who knows? Who knows? I may even decide to beat them for a third time,” Trump said, alluding to his 2016 victory, his disputed loss in 2020 and 2024.

Trump made clear that he will seek to remain a powerful force in Republican politics. “I stand before you today to declare that the incredible journey we began together . . . four years ago is far from being over,” he said. “This movement is just getting started, and in the end, we will win.”

Trump has taken aim at President Biden, labelling the Democrat’s first thirty days in office  “the most disastrous first month” of any president in modern history. Continuing his onslaught on the president, Trump argued that the new administration has quickly taken the country further left than advertised, describing Biden’s presidential campaign as “all lies.” Trump accused the Democratic Party of being “anti-jobs, anti-family, anti-economy, anti-energy and anti-women and anti-science.”

A straw poll of CPAC participants, released on Sunday, showed that Trump retains dominating support from the conservative wing of the Republican Party. He was picked as the top potential 2024 GOP presidential nominee by 55 percent of respondents. Ninety-five percent said they want the party to continue with Trump’s agenda and policies, regardless of whether he runs for president in 2024.

Florida Governor Ron DeSantis was a distant No. 2 at 21 percent, benefiting from a recent surge in popularity and the event being held in Orlando, the fourth-largest city in his home state. There was a big drop-off in support after that, with South Dakota Governor Kristi Noem being favored by 4 percent of participants and former South Carolina Governor Nikki Haley at 3 percent. Former Secretary of

Another potential Republican front-runner, former Vice President Mike Pence, was apparently left out of the poll. Pence declined to speak at CPAC, leading to speculation that he was staying away because of a rift with his former boss. Trump posted a Twitter message saying Pence “didn’t have the courage” to protect the nation by blocking official certification of Democrat Joe Biden’s election victory. The tweet went out even as rioters were breaching the Capitol and Pence had been evacuated from the Senate chamber.