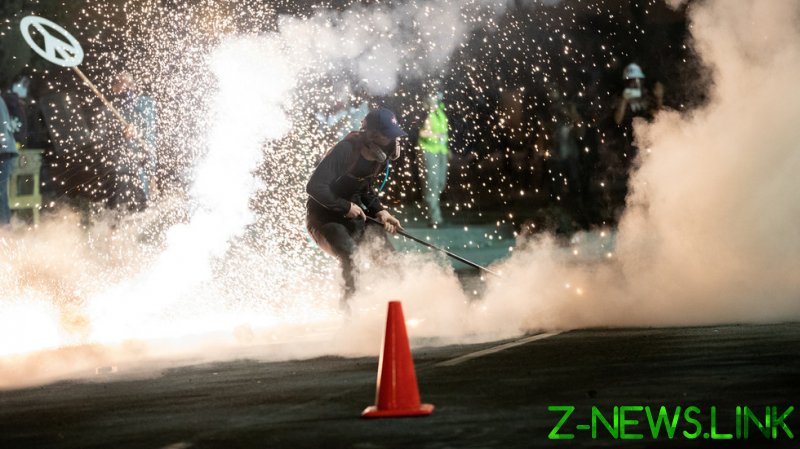 A five-page memo sent to federal agencies on Wednesday orders them to report to the White House Office of Management and Budget on any funding that could be redirected. New York City, Portland, Seattle and even Washington, DC are among the initial targets of the measure.

OMB Director Russell Vought was told to issue guidance on “restricting eligibility of or otherwise disfavoring, to the maximum extent permitted by law, anarchist jurisdictions in the receipt of Federal grants” within 30 days.

Attorney General Bill Barr was given 14 days to put together a list of  “anarchist jurisdictions” that “permitted violence and the destruction of property to persist and have refused to undertake reasonable measures” to restore order.

“My Administration will not allow Federal tax dollars to fund cities that allow themselves to deteriorate into lawless zones,” Trump says in the memo. To ensure the federal funding is not wasted or “spent in a manner that directly violates our Government’s promise to protect life, liberty, and property, it is imperative that the Federal Government review the use of Federal funds by jurisdictions that permit anarchy, violence, and destruction in America’s cities.”

New York City has refused to prosecute rioters, rejected the offer of federal help, and cut the police budget despite an “unconscionable rise in violence,” the memo says. It also denounced the “failed leadership” in Seattle, Washington, where anarchists actually established an “autonomous zone” that Mayor Jenny Durkan tolerated until protesters – led by a city council member – came to her own doorstep.

Portland, Oregon mayor Ted Wheeler continues to support “peaceful protesters” that have besieged a federal courthouse for over three months and even set his own apartment building on fire.

DC Mayor Muriel Bowser also made the list, for allowing “rioters and anarchists to engage in violence and destruction in late May and early June,” that required Trump to deploy the National Guard. The memo was drafted prior to last week’s incidents following the Republican National Convention, when angry mobs attacked those in attendance, including Senator Rand Paul (R-Kentucky), in part because Bowser refused to allow additional security.

OMB director Vought told the New York Post, that the administration was “exploring all options to ensure federal resources flowing to lawless cities aren’t being squandered.”

“The lack of law and order surrounding these riots, and response from local leadership, is a dereliction of duty,” Vought added. “Our men and women in blue cannot be handcuffed by local leadership in their efforts to respond to riots and protect their fellow citizens.”

Initial protests over the death of George Floyd, an African-American man who died as Minneapolis, Minnesota police attempted to arrest him at the end of May, quickly escalated into riots and unrest – first in the Twin Cities and then spreading across the US. Trump has pointed out that the cities where riots have taken place are run by Democrats who refused federal assistance to re-establish order.

After months of referring to the unrest as “peaceful protests,” mainstream media outlets began blaming the riots on Trump and noting that it makes Democrats look bad in the polls. Democrat presidential nominee Joe Biden denounced “all violence” earlier this week, but Republicans accused him of in effect threatening Americans with more violence unless they vote for him.