Trump more and more dissatisfied with the Secretary of state Tillerson 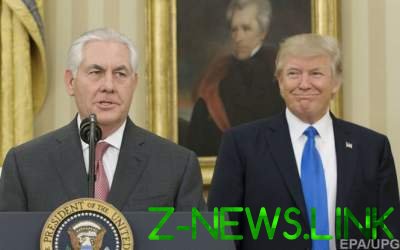 According to sources, Tillerson may resign before Jan.

The President of the United States Donald trump is more and more dissatisfied with the Secretary’s Rex Tillerson.

Trump unhappy Tillerson due to disagreement over the number of troops in Afghanistan, Qatar and the blockade policy against Cuba.

Hardly Tillerson will remain in his post until January, claiming that he is Secretary of state, he worked for less than a year.

In addition, he Tillerson, who is not accustomed to taking orders from superiors, as Director of ExxonMobil, in private conversations talked about wanting to retire.

Trump “seething with discontent” because of the personal disloyalty of a Director of the National economic Council Gary Cohn, who criticized the US President for stance on events in Charlottesville.

The publication also notes that “the short-tempered Donald trump will almost certainly come into conflict with the President’s chief of staff John Kelly”.

At the same time, one of the former advisers of trump’s pre-election staff Barry Bennett said that the outbreak of discontent is a normal behavior of the President.

According to him, he repeatedly threatened to fire many people from the electoral headquarters, and never did.