Home / WORLD / ‘Trump left a minefield between US and Venezuela’: Maduro says he’s ready to ‘work’ with Biden to mend relations

‘Trump left a minefield between US and Venezuela’: Maduro says he’s ready to ‘work’ with Biden to mend relations 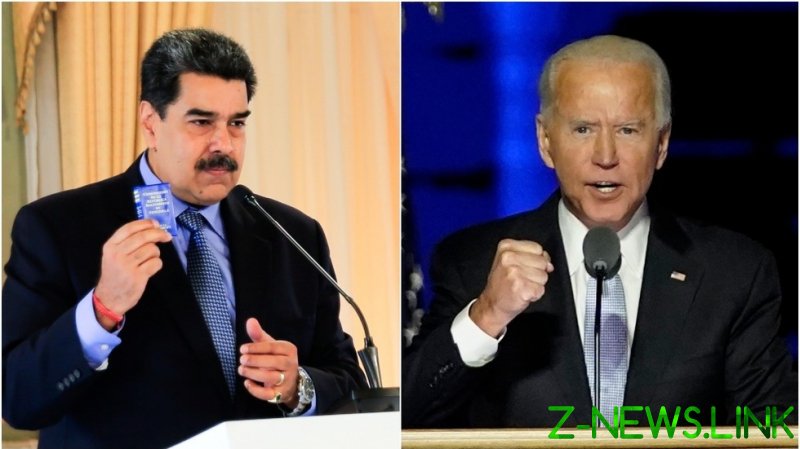 “We will work, hopefully, to resume decent, sincere, direct channels of dialogue between the future government of Joe Biden and the legitimate and constitutional government of Venezuela,” Maduro said in a televised speech on Sunday.

Donald Trump left a minefield between the government of the United States and Venezuela … he left a swamp.

Maduro expressed hope that Biden would end US “interventionism” in South America. At the same time, the Venezuelan leader took a jab at the Barack Obama administration, in which Biden served as vice president. Obama “ruled for eight years and there was no significant change,” Maduro stated. He added that, despite some “minor reforms,” Obama’s presidency acted “in service of the military and media apparatus of the North American empire.”

Maduro earlier congratulated Biden and his running mate for vice president, Kamala Harris, and said that Caracas was “ready for dialogue and understanding” with the US.

Major US news outlets projected that Biden has won more than the 270 Electoral College votes needed to beat Trump in the race for the White House. But Trump has refused to concede, alleging widespread voter fraud and claiming that he had actually won the election.

The Trump administration has been openly backing Venezuelan opposition leader Juan Guaido, who was elected as interim president by the opposition-controlled parliament in 2019. Guaido was then recognized as legitimate leader of Venezuela by Washington, as well as by the majority of European and South American nations. Nations like China, Russia, Iran, and Turkey continue to consider Maduro president of the country.

The US imposed sweeping sanctions on Caracas and charged several high-ranking officials, including Maduro, with “narco-terrorism,” drug trafficking and corruption. Maduro, meanwhile, has repeatedly accused the US of plotting a coup in Venezuela to remove him from power.