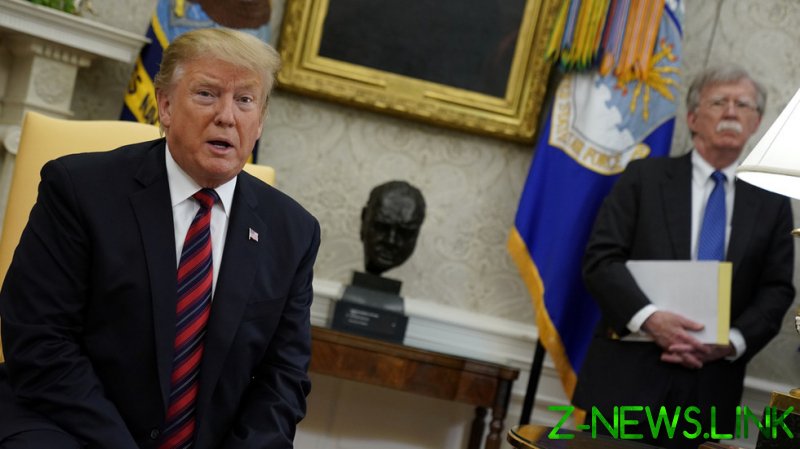 “Martial law = Fake News,” Donald Trump tweeted, before targeting Bolton, a former member of his administration who became a vocal critic of the incumbent president after parting ways with Trump in September last year.

Trump reminded his Twitter followers how, in 2018, then-advisor Bolton threw a wrench into the talks with North Korea on its nuclear arsenal by suggesting it follow a “Libya model” of disarmament. In 2003, Libya’s leader Muammar Gaddafi agreed to shut down his nuclear weapons program in exchange for rapprochement with the West, only to be ousted from power and brutally murdered during a NATO bombing campaign in 2011. Pyongyang says it needs nuclear weapons to defend itself from the US.

The outraged presidential posts appear to have been prompted by Bolton’s appearance on CNN. Bolton had been invited to comment on the idea promoted by one of his predecessors, Michael Flynn, who believes the US is on a brink of civil war and Trump would therefore be justified in declaring limited martial law and running a new presidential election under the supervision of the military.

During his interview, Bolton called the suggestion “appalling, unbelievable, and almost certainly completely without a precedent” and suggested that even considering it showed incompetence on Trump’s part.

“There is a difference between incompetence and malevolence, and, in Trump’s case, this is incompetence. He is unfit for the job,” he said, reiterating a point he has been making since resignation.

Flynn and others argue that the precedent was set by Abraham Lincoln during the run-up to the US Civil War. At the time, the president thought the federal government’s existence was under threat from a Southern rebellion and took drastic measures to protect it, including allowing the military to make arrests without a specific charge.

The US today is in a similarly perilous position, proponents of martial law believe, due to the alleged widespread fraud that secured a victory for Joe Biden last month. Flynn reportedly had a chance to argue his position before Trump during a Friday meeting at the White House.

The meeting, first reported by the New York Times based on accounts of “two people briefed on the discussion,” at times escalated into shouting matches between lawyer Sidney Powell, a Flynn ally, and Trump advisers. The White House officials reportedly objected to the suggestion that Powell is authorized by the president to investigate voter fraud.

Trump refused to concede to Biden and repeatedly alleged that the election had been stolen from him. Some of his supporters still believe that, even though his lawyers’ attempts to overturn the outcome have repeatedly failed in the courts.

Powell was considered part of Trump’s legal team until last month, when she became a vocal promoter of a case that involves alleged manipulation of tabulation by vote machines. Her lawsuits in the swing states of Georgia and Michigan have been tossed out as merely “an amalgamation of theories, conjecture, and speculation,” however.

Biden’s victory was officially sealed by the US Electoral College earlier this week.