Home / WORLD / Trump Iowa rally signals 2024 run, but will Americans give him another chance to clear out the ‘radical socialists’ destroying US?

Trump Iowa rally signals 2024 run, but will Americans give him another chance to clear out the ‘radical socialists’ destroying US? 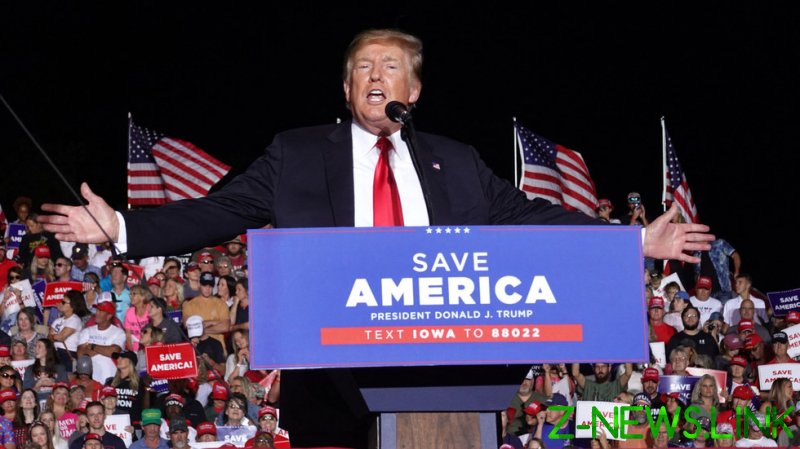 The 45th president proved on Saturday at an electrified rally in Des Moines, Iowa, that the smug, defiant face of the Republican Party continues to be Donald J Trump. As long as the rabble-rouser continues to flirt with the idea of another presidential term, other possible contenders – like Texas Senator Ted Cruz, former Vice President Mike Pence and former UN ambassador Nikki Haley – will remain dried up wall flowers next to America’s most controversial politician in many ages.

Trump, the perennial showman, proved that he still possesses the uncanny ability for channeling the raw anger and frustration that so many Americans are experiencing right now. His fight is their fight. But, to be fair, public fury in the US is bubbling so close to the surface that even a political amateur would have little trouble setting these passions alight. In the hands of a master orator like Trump, however, the result is something flammable to behold.

Never one to mince his words, Trump summed up the Biden administration’s first nine months in office by saying it has brought the country “to the brink of ruin.”

Reiterating his belief that the 2020 election was “rigged,” Trump went on to rail against the Biden administration’s efforts at a “power grab” through its mandatory vaccine ruling, which effectively declared America an apartheid state.

Trump’s message that Biden has been an unmitigated disaster for the country seems to be resonating with voters, especially those from the bellwether state of Iowa. The latest Des Moines Register/Mediacom Iowa Poll reported 53% of Iowans hold a favorable view of the former Republican president and 45% have an unfavorable view – his best showing ever on either metric in the Iowa Poll, even when he was president.

Meanwhile, Joe Biden, whose public appearances look increasingly like Saturday Night Live skits as White House staff rush him out of rooms before he can address the media, garnered just 37% favorability among Iowans, with a whopping 61% reporting unfavorable. Those are Biden’s worst numbers in seven Iowa Polls dating back to 2012.

Looking ahead to the 2024 elections, the one foreseeable obstacle that could derail Trump’s undying ambitions is the creeping age factor. While the Republican populist looked in top form this weekend, he will be 78 years old in three years. Biden, on the other hand, in the unlikely event he is not forced to vacate the Oval Office before then, will be 82 years old. At the age of 78, the Democrat leader already had the distinction of being the oldest person on record to become US president.

Trump will thus find himself in the powerful position to be a potential king or kingmaker in the 2024 presidential campaign, opting either to take another shot for the White House at an advanced age, or use his immense clout by throwing his support behind a younger politician who shares his vision. On that score, Republican Florida Gov. Ron DeSantis, who has fought back against Biden’s fiercely divisive Covid regulations with real tenacity, gives conservatives what they want to hear, albeit without Trump’s trademark saucy tongue.

Finally, there is one last obstacle that Republicans must overcome in order to get out as many voters as possible come 2024, as well as in the 2022 midterms, and that is voter apathy. Although the official mainstream narrative proclaims that Joe Biden beat Donald Trump in a fair and square election, millions of Republicans – and even some Democrats – continue to believe otherwise.

In a September poll taken by Suffolk University/USATODAY, 70% of Republicans maintained that Joe Biden was not legitimately elected President, while 22% concede that he was.

This conviction among many Republicans that the Democrats “stole” the 2020 election has spawned a deep distrust in the US electoral process where people have assumed a dangerously cynical attitude as they ask: ‘what’s the point of voting if the elections are rigged in the first place?’

To remedy their grievances, Trump supporters want to see a major overhaul of the voting procedures, which would entail the elimination of mail-in voting, together with the introduction of voter registration cards – two motions that the Democratic Party has rejected, farcically, as “racist.”

The far more urgent question, then, is not whether Trump will run again in 2024, or become the ultimate kingmaker, but whether the American people can have their faith restored in the democratic process. If the answer is no, the United States will have far more pressing matters to consider than its next presidential election, and possibly earlier than anyone can imagine. Liberty itself hangs in the balance.