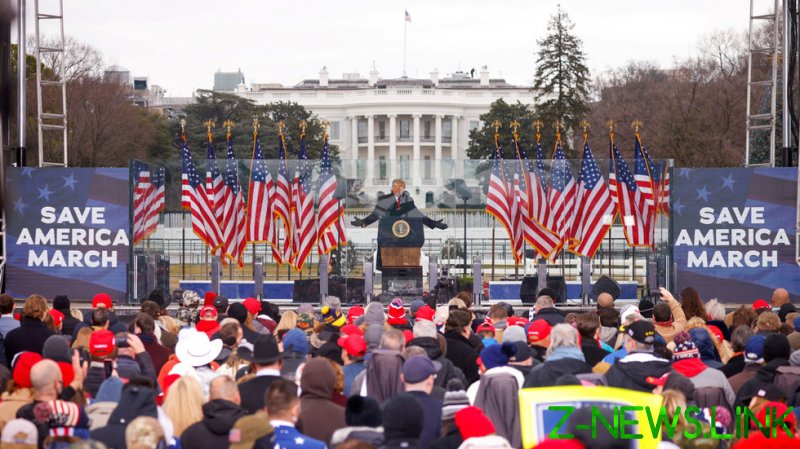 As the former president prepares to face the Senate for his second impeachment trial, Trump’s lawyers have called out Democratic leaders for what they describe as a shameful weaponization of the January 6 Capitol raid, denouncing the proceedings as both unconstitutional and unprofessional.

The demonstrators had already planned to enter the Capitol when Trump began speaking to them in front of the White House, the lawyers’ memo, obtained by the Washington Post on Monday, reveals, adding that the FBI has confirmed the riot was planned “several days before” January 6. The document says that not only did the Capitol Police have advanced notice of the raid, but the New York Police Department, FBI, and even members of the House leadership were also aware something big was being planned for that day.

“The people who criminally breached the Capitol did so of their own accord and for their own reasons, and they are being criminally prosecuted,” the memo states. Regardless of those reasons, Trump’s speech itself contained no incitement to violence, and certainly “not an act encouraging organized movement to overthrow” the US government, the memo points out, taking the time to dissect the meaning of the word “fight” in context (and list a few of the thousands of times Democrats, too, have deployed it metaphorically).

Democrats on the House Judiciary Committee even “publicly admitted that they began drafting the Article of Impeachment moments after angry extremists breached the doors of the Capitol,” the memo notes – no investigation (or due process) required. No attempt was made to establish whether the events could even be classed as insurrection – that is, a raid intending to “overthrow and take possession of a government’s powers.” Such an investigation, the lawyers argue, would have revealed quickly that what became the ‘definitive’ sequence of events was based not on details confirmed by law enforcement, CCTV footage, or other verifiable facts but on sensationalistic news broadcasts.

All but three of the 170 citations used as the basis of the impeachment memo that supposedly “proved” Trump incited the riot were taken from media coverage gleaned from “over 50 sensationalized media reports,” the defense memo goes on. They also accuse the drafters of the impeachment memo of “cherry-picking” Trump’s recent speeches in order to come up with something that could be passed off as incitement-worthy material.

The defense also tears into the impeachment managers for disregarding a plethora of constitutional rules in their rush to conduct the “fastest presidential impeachment inquiry in history.” Not only did House Speaker Nancy Pelosi order then-VP Mike Pence to invoke the 25th Amendment against Trump by threatening to launch another impeachment process if he didn’t – an “extortionate threat” she made good on – but her Democrat colleagues were apparently unaware that the Senate “lacks the Constitutional jurisdiction to conduct an impeachment trial of a former president.” Despite Pelosi’s quick move to impeach, Congress was left empty-handed when Trump left office on the 20th, having ‘merely’ won a vote to impeach on the 13th.

Describing the subsequent rush to demonize both the outgoing administration and every supporter of it as “a master’s class in the art of political opportunism,” the lawyers accuse Trump’s enemies of “prey[ing] upon the feelings of horror and confusion that fell upon all Americans across the entire political spectrum” on the day of the riot.

The proceedings shouldn’t even have made it to the Senate, they argue, given the ex-president had been deprived of due process, and the procedural lapses make Tuesday’s trial even less valid. However, having failed to convict Trump the first time they impeached him – over a year ago – Democrats are very unlikely to acknowledge any inconvenient facts that might prevent them from securing a conviction this time.

The former president was charged with inciting a riot after hundreds of thousands of his supporters descended on Washington DC on January 6 to protest what they believed was a stolen election. Trump spoke to the crowd as they marched to the Capitol, praising their perseverance in continuing to support him while hinting that he hoped Pence would “do the right thing” and refuse to certify rival Joe Biden’s win. Trump hit on a few of his preferred talking points – social media censorship, media establishment bias, his own accomplishments – and detailed how the vote was supposedly stolen, telling his supporters to “fight like hell.” As protesters streamed into the Capitol, things turned chaotic, resulting in five deaths: one woman was shot by Capitol Police, while an officer was bludgeoned with a fire extinguisher; three others died of unspecified medical emergencies. Democrats have argued that Trump’s speech at the rally amounts to the incitement of insurrection.