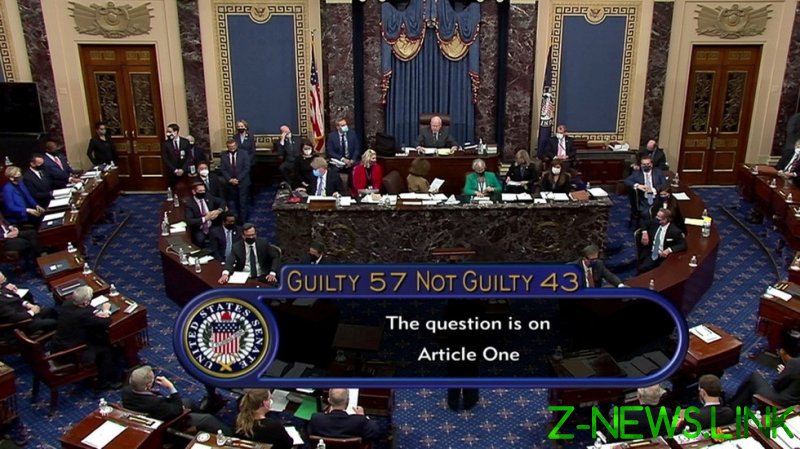 “It is a sad day in America when only 7 republicans have the patriotism and integrity to convict a tyrant,” actress and Democrat activist Alyssa Milano tweeted minutes after Trump’s acquittal was announced, with 43 Senators ultimately voting down the article of impeachment accusing the former president of “inciting an insurrection.”

Milano and others recommended Trump be tried in actual court, a highly unlikely scenario.

In order for Trump to have been convicted, 17 Republicans would have had to side with Democrats on impeachment, which many speculated was nearly implausible. Ultimately, seven Republicans voted to impeach after closing arguments from Trump’s defense team and Democrats pushing for the conviction.

The Republicans who supported Trump through the trial – many of whom chalked up Trump’s rhetoric on January 6 in the run-up to the US Capitol riot and before then pushing election fraud allegations as free speech that should not be legally punished – faced the wrath of liberals for their decisions, blasted as “enemies of democracy” and “fascists.”

“I don’t know who needs to hear this, but this whole Impeachment is really just a referendum on whether white supremacy should continue to be the organizing principle of The United States of America,” comedian W. Kamau Bell tweeted about the result.

Comparing Trump’s acquittal to a victory for “white supremacy” was a common thread among Trump critics on Twitter.

“Acquitting Donald Trump ignores just how dangerous he was and continues to be. So long as there is no accountability, the white supremacy he and others like Senators Ted Cruz and Josh Hawley uplift will remain a threat to our democracy,” the Black Lives Matter Twitter account said.

Sen. Mitch McConnell (R-Kentucky) was specifically targeted by many for his not-guilty vote being followed by a Senate floor speech where he said Trump is “practically and morally responsible” for the riot on January 6. He even appeared to suggest Trump could be open to criminal prosecution as a private citizen.

“After voting to acquit, McConnell is slamming Trump for his lies leading up to Jan 6 and the violence at the Capitol. A McConnell vote to convict could have changed everything,” CNN’s Jim Acosta tweeted.