Home / WORLD / Trump flown to Walter Reed as ‘precautionary measure’ for Covid-19, will be working from military hospital for a ‘few days’

Trump flown to Walter Reed as ‘precautionary measure’ for Covid-19, will be working from military hospital for a ‘few days’ 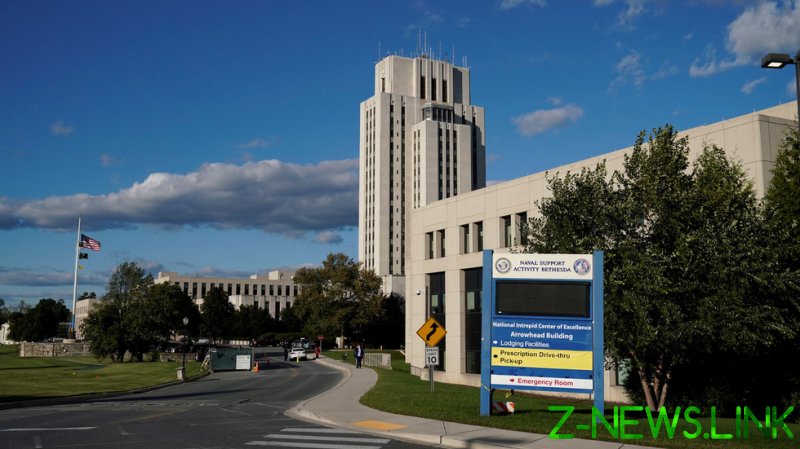 The president, who tested positive for Covid-19 on Thursday night, was flown to the hospital complex in Bethesda, Maryland – just outside Washington, DC – on Friday afternoon, where a special suite was prepared for him.

Trump left the White House shortly after 6 pm local time, and walked to the helicopter on the South Lawn unassisted. He waved and gave the “thumbs-up” gestures to the press pool, but did not take any questions.

Trump also tweeted an 18-second video message announcing he was going to Walter Reed and thanking everyone for the kind wishes. “I think I’m doing very well,” he said.

“Out of an abundance of caution, and at the recommendation of his physician and medical experts, the president will be working from the presidential offices at Walter Reed for the next few days,” White House Press Secretary Kayleigh McEnany said in a statement. Doctors urged the move so Trump could get immediate care if needed, according to an unnamed White House official.

The surprise announcement comes shortly after his physician, US Navy Commander Sean P. Conley, announced that Trump had been treated with an experimental antibody cocktail and a range of supplements including vitamin D and zinc. Trump “remains fatigued but in good spirits,” Conley said.

First Lady Melania Trump, who also tested positive for the virus, was experiencing a headache and a “mild cough.” The rest of the first family has tested negative.

Earlier on Friday, the White House chief of staff and press secretary maintained that Trump was still involved in governing and issuing assignments. However, Vice President Mike Pence replaced him on the previously scheduled conference call with governors.