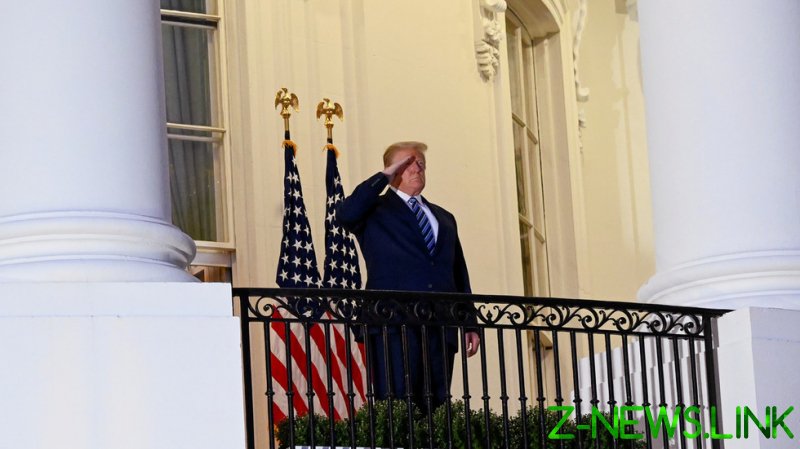 When US President Donald Trump was diagnosed with Covid-19 himself just weeks ago, and was admitted to Walter Reed military hospital for treatment and observation, he reportedly had told sources that he wanted to rip open a shirt to reveal a Superman logo when he left the hospital.

And Trump has spent considerable time wisecracking on Twitter about Dr. Anthony Fauci – the chief scientific figure who has been cast by mainstream and establishment politicians as its primary face of Covid-related wisdom and the nation’s main authority on infectious disease – in a display of classic New York style humor.

“All I ask of Tony is that he make better decisions. He said ‘no masks & let China in.’ Also, Bad arm!” Trump said, referring to the first pitch that Fauci was invited to throw at the Washington Nationals baseball team’s opening day – three months prior. “P.S. Tony should stop wearing the Washington Nationals’ Mask for two reasons. Number one, it is not up to the high standards that he should be exposing,” Trump tweeted, referring to Fauci’s cloth mask. “Number two, it keeps reminding me that Tony threw out perhaps the worst first pitch in the history of Baseball!”

The best thing about the Trump presidency is arguably that every morning, no matter how bad a day you’re having, you can be assured that when you open your Twitter feed alongside your morning coffee, Trump will have said something that will make you shoot your Nescafe out your nose. (That is, if partisan hysteria hasn’t caused you to completely lose your sense of humor.) Modern-day US presidents haven’t exactly been the epitome of statesmanship, but unlike them, at least Trump gives you a chuckle.

The problem with his approach is that while Trump is focused on wisecracks – however entertaining they can be – the Covid counter-narrative led by the usual suspects in the Washington establishment and their unelected (but often equally political) specialists and advisors, is one of doom and gloom. They bombard the public with cherry-picked figures – like the transition to a preference for advancing numbers of ‘cases’ over deaths – and capitalize on Trump’s more fatalistic approach to portray him as incompetent at best and a willfully negligent maniac at worst.

Governments around the world have been hard-pressed to prove that they’re doing something – anything – to control the Covid situation. Even if the effectiveness of government actions are still difficult to reliably assess or to separate from pre-existing endemic social and cultural factors that could account for variation in outcomes across or within nations.

Yet the establishment is arrogantly and absolutely certain that they have all the answers vis-à-vis a phenomenon that is, by definition, so new that it’s called the ‘novel coronavirus’. They vilify anyone who deviates from their views. We’ve seen this kind of establishment groupthink before. One example being the issue formerly known as “global warming” (now known as ‘climate change’, or, more recently, ‘climate deregulation’, because the issue was rebranded when it became difficult to explain how supposed ‘warming’ was causing colder weather). Any deviation from conventional establishment wisdom on this results in a pile-on and cancellation – just ask Mike Shellenberger.

The same establishment hacks also persist with the simplistic narrative of good guys (America and its allies) versus bad guys (Russia and China, and their allies). This worldview is peddled every time they attempt to ramp up support for a natural resource grab or geopolitical power-play in some part of the world. Why should anyone trust their narrative when it comes to Covid? They’ve proven repeatedly that they’re anything but trustworthy and transparent.

The Covid crisis pitted self-declared anti-war, anti-establishment, anti-globalist Trump against the very people he has long promised the American people he would fight and expose. So, expose them already! Get off Twitter and stop conjuring up cheap stunts that are good for a giggle but do nothing to affect the kind of deep, systemic institutional relief from those who have held the average citizen hostage with their harmful policies that seem to benefit a chosen few rather than the common man.

As US president, Trump has long had access to a wealth of intelligence of the highest level. It behooved him to piece together a counter-narrative to neutralize the bad Washington establishment actors by exposing them. The fact that Trump neglected that opportunity – in favor of cheap shots and rhetorical kiddie play – is the biggest failure of his tenure. And it may now cost him re-election.