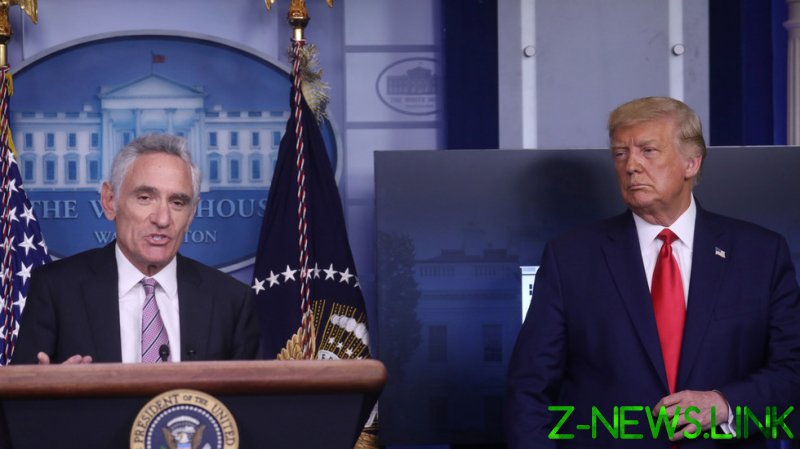 Three vaccines are “already in the final stage” of testing, Trump told reporters at Friday’s press briefing, noting that “brilliant” US doctors and scientists have been working round the clock since January.

The announcement clarifies remarks made at Thursday’s briefing, where Trump and Atlas spoke about “hundreds of millions of doses” of a vaccine available sometime in the first quarter of 2021.

Earlier this week, director of the Centers for Disease Control and Prevention (CDC) Robert Redfield said a vaccine wouldn’t be widely available until later in the year.

“If you’re asking me when is it going to be generally available to the American public so we can begin to take advantage of vaccine to get back to our regular life, I think we’re probably looking at… late second quarter, third quarter 2021,” he told the Senate Appropriations subcommittee on labor, health and human services, on Wednesday.

“Joe Biden’s anti-vaccine theories are putting a lot of lives at risk, and they’re only doing it for political reasons, it’s very foolish,” Trump said. “It’s part of their war to try and discredit the vaccine now that they know that we essentially have it.”

At a CNN-hosted town hall in Pennsylvania on Thursday, Biden said he did not trust Trump’s word about the vaccine, but clarified he would take one endorsed by Dr. Anthony Fauci, one of Trump’s coronavirus advisers.

“I trust vaccines, I trust the scientists, but I don’t trust Donald Trump,” Biden told his audience.