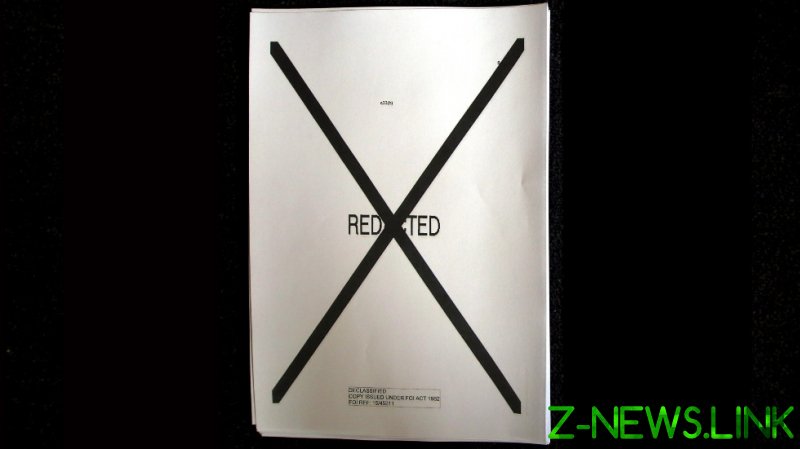 The Justice Department provided Trump with the documents on December 30, but the FBI took until this past Sunday to review them and told the outgoing president they had a “continuing objection to any further declassification of the materials.”

However, the Bureau also “identified the passages that it believed it was most crucial to keep from public disclosure,” according to a White House memo sent out to the press on Tuesday evening.

Trump accepted the FBI’s proposal and decided to “hereby declassify the remaining materials in the binder,” according to the memo, addressed to FBI Director Christopher Wray, acting Attorney General Jeffrey Rosen, and Director of National Intelligence John Ratcliffe.

“This is my final determination under the declassification review and I have directed the Attorney General to implement the redactions proposed in the FBI’s Jan. 17 submission and return to the White House an appropriately redacted copy,” the memo said. It remains unclear when the materials would actually be made public.

The order comes hours after CIA Director Gina Haspel announced her retirement, ahead of Joe Biden’s impending inauguration. One of the things the memo notes is that the FBI’s redactions were made “on the basis of a review that included Intelligence Community equities.”

Trump originally ordered the declassification of all documents related to the Russia probe in September 2018 – only to cave to the FBI and the spies when they urged him to reconsider to protect “allies.” The issue basically disappeared until after the retirement of DNI Dan Coats in August 2019.

By that point, all sorts of FBI documents were already being released to the public as part of the appeals process in the trial of General Michael Flynn, charged by special counsel Mueller with lying to the FBI as part of the Russiagate probe. Though a number of campaign officials were jailed for process and unrelated crimes, Mueller’s final report found no trace of “collusion” with Russia in the 2016 US presidential election.

Last week, the Senate Judiciary Committee released its own documents about the Russiagate probe, declassifying interviews with the officials involved.

While Senator Lindsey Graham (R-South Carolina) described Crossfire Hurricane as “a massive system failure” and “one of the most incompetent and corrupt investigations in the history of the FBI and DOJ,” he merely expressed hope that the FBI and the DOJ would reform themselves and never prosecute people for political purposes ever again.