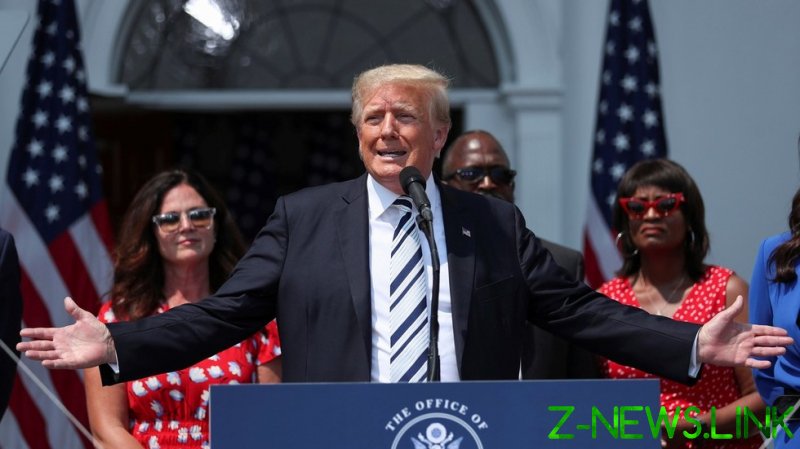 “He’s a stupid person,” the former president said of McConnell in an interview published by Vanity Fair on Monday. “I don’t think he’s smart enough.” He added, “I tried to convince Mitch McConnell to get rid of the filibuster, to terminate it, so that we would get everything, and he was a knucklehead and he didn’t do it.”

McConnell, the former Senate majority leader, was far from being the only target of Trump’s ire in the interview, which took place in March at his Mar-a-Lago resort in Florida and was done for a book by two Washington Post journalists. Former Vice President Mike Pence and Attorney General Bill Barr also took fire, as Trump faulted them for failing to stop what he called “the greatest fraud ever perpetrated in this country” – Biden’s victory in the 2020 presidential election.

Pence, who’s likely to run for president in 2024, resisted pressure from Trump to block congressional certification of Biden’s win on January 6. Pence should have challenged the results from disputed states and sent them back to lawmakers in those locales to resolve, which would have led to a different outcome, Trump said.

“I think the vice president of the United States must protect the Constitution of the United States,” he said. “I don’t believe he’s just supposed to be a statue who gets these votes from the states and immediately hands them over. If you see fraud, then I believe you have an obligation to do one of a number of things.”

“Bill Barr disliked me at the end, in my opinion, and that’s why he made the statement about the election because he did not know” that massive election fraud hadn’t occurred, Trump said, adding, “He started off as a great patriot, but I don’t believe he finished that way.”

Trump pointed to other villains, including the US Supreme Court – and specifically Justice Brett Kavanaugh – as well as Arizona Governor Doug Ducey for enabling Biden’s victory to stand up. And beyond McConnell, he ripped such Republicans as former US House Speaker Paul Ryan, Senator Mitt Romney (Utah) and the late John McCain (Arizona) for hindering his agenda while in office.

Another culprit, Trump pointed out, was the Covid-19 pandemic. Before the virus outbreak, he saw himself as “unbeatable,” regardless of how strong a candidate he might face in 2020.

Although he expressed no regrets about his handling of the pandemic, Trump criticized two of his top White House medical advisers, Dr. Anthony Fauci and Dr. Deborah Birx. Fauci was a “self-promoter” who was “wrong on everything,” he said, while Birx was so over-reaching on social-distancing restrictions that “if it were up to her, everything would be closed forever.”

Trump did have a regret concerning last year’s riots in major US cities, saying, “I think if I had it to do again, I would have brought in the military immediately.”

The former president also regretted that some of his supporters breached the Capitol on January 6. He said he wanted his supporters to gather en masse outside the Capitol to protest certification of fraudulent election results, but not to enter the building.

“Personally, what I wanted is what they wanted,” he said. “They showed up just to show support because I happen to believe the election was rigged at a level like nothing has ever been rigged before.”

Those former allies who failed to show sufficient support during the battle over the election results apparently won’t get back in Trump’s good graces, if they should seek to. Ex-South Carolina Governor Nikki Haley, who Trump appointed as ambassador to the United Nations, fits into that category.

“Nikki Haley wants to come here so badly,” Trump said. “She did a little nasty couple of statements. She has been killed by the party. When they speak badly about me, the party is not happy about it.”

Former New Jersey Governor Chris Christie, who was the No. 2 choice to become his vice-presidential running mate in 2016, likely won’t be on the shortlist again if Trump runs in 2024. “Chris has been very disloyal, but that’s OK,” Trump said.

Having Trump’s blessing remains valuable for Republican office seekers. As Trump himself noted, a long line of GOP politicians have made the trek to Mar-a-Lago to seek his endorsement for various positions. Even McConnell said in February that he would “absolutely” support Trump as the party’s 2024 presidential nominee.

The Kentucky senator had accused Trump of “disgraceful dereliction of duty” over his actions leading up to the Capitol riot, but he softened his stance after a poll showed that 46% of Republican voters would abandon the GOP if Trump started a new party.