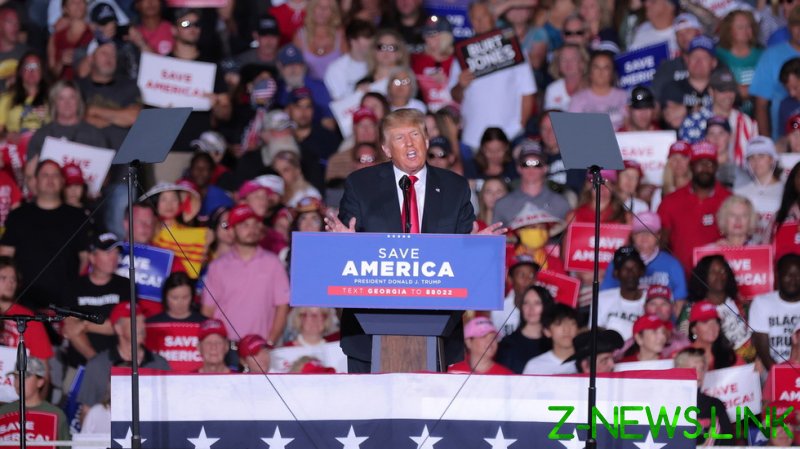 In a Sunday statement, Trump called the outlets’ reporting on the theory that Russia interfered in the 2016 presidential election and colluded with Trump’s team – something an investigation ultimately found no actual evidence of – a “false narrative.”

“As has been widely publicized, the coverage was no more than a politically motivated farce which attempted to spin a false narrative that my campaign supposedly colluded with Russia despite a complete lack of evidence underpinning this allegation,” the former president wrote in a letter addressed to Bud Klimet, interim administrator of the awards. He previously called for the awards to be revoked in 2019.

He went on to cite the indictment of Michael Sussman as proof of his accusation against the papers. Sussman, a lawyer who had worked for Hillary Clinton’s campaign, was accused of lying to the FBI when he tipped them off in 2016 to a potential tie between Trump’s presidential campaign and the Kremlin.

The Times and Post were given the National Reporting award in 2018 for their reporting on the ‘Russia collusion’ story, and Trump called for the outlets to be given a chance to “voluntarily surrender” the prize back to the Pulitzers.

“When it becomes apparent that a Pulitzer Prize-winning work was based on shoddy, dubious and manifestly false reporting – as is the case here – the Pulitzer Prize Board must react accordingly,” he wrote.

Former special investigator Robert Mueller has said his report on alleged Russian collusion did not “exonerate” Trump, as the president has claimed. The report, however, ultimately did not substantiate the more sensational stories covered in the media.

The president has often chalked Mueller’s years-long and expensive investigation up to a “witch hunt” that the rest of the world was “laughing” at.

“The single greatest Witch Hunt in American history continues. There was no collusion, everybody including the Dems knows there was no collusion, & yet on and on it goes. Russia & the world is laughing at the stupidity they are witnessing. Republicans should finally take control!” he tweeted in 2018 while the investigation was ongoing.