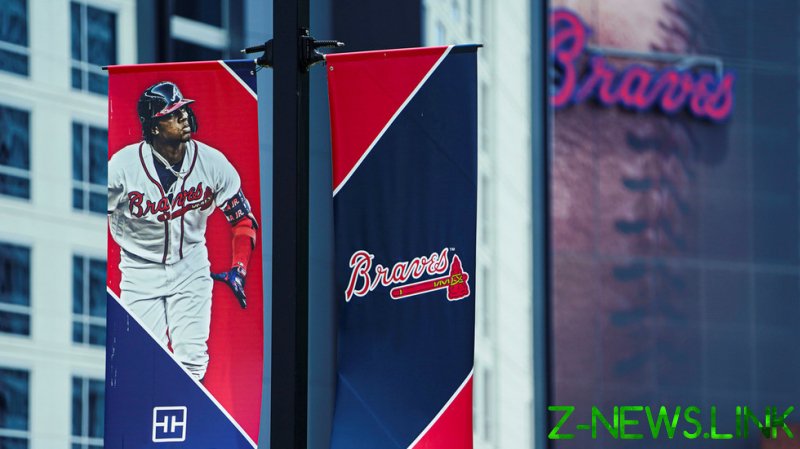 “Baseball is already losing tremendous numbers of fans, and now they leave Atlanta with their All-Star Game because they are afraid of the Radical Left Democrats who do not want voter I.D. … to have anything to do with our elections,” Trump said in a statement released by his Save America PAC on Friday night, also taking a jab at major corporations that have criticized Georgia’s recently passed election bill.

The ex-president’s statement came after MLB commissioner Robert Manfred announced earlier on Friday that both the game and the draft will be relocated from Atlanta as “the best way to demonstrate our values as a sport.”

MLB “caved to fear, political opportunism, and liberal lies,” Governor Brian Kemp said in response, issuing both a statement and a series of tweets on Friday afternoon. MLB’s decision means that “cancel culture and woke political activists are coming for every aspect of your life, sports included. If the left doesn’t agree with you, facts and the truth do not matter,” Kemp added.

The “attack” on Georgia is a “direct result of repeated lies from Joe Biden and Stacey Abrams about a bill that expands access to the ballot box and ensures the integrity of our elections,” the governor said. “I will not back down. Georgians will not be bullied.”

Abrams is a Democrat who lost the 2018 gubernatorial election to Kemp, refusing to concede and claiming she was cheated. Her lawsuit led to Georgia agreeing to loosen verification rules in the 2020 election, which resulted in Biden winning the state thanks to mail-in votes and Democrats capturing both seats in the US Senate, giving the party total control in Washington.

Reacting to the MLB decision, Abrams said she was “disappointed” by the game’s move out of Atlanta, but blamed Republicans for “making it harder for people of color to vote.” She also called for the “corporate community” to join her in the fight against the law – passed last week – and argued that leaders “must support” controversial House Democrat bills that seek to federalize election rules.

Biden had denounced the Georgia bill as “Jim Crow in the 21st Century,” referring to the nickname for notorious segregation laws once aimed against African Americans. Mainstream media fact-checkers have called him out on misrepresenting some of the law’s provisions – even as they parroted the Democrat narrative about it amounting to ‘suppression’ of voters by requiring ‘racist’ voter ID.

One sports commentator pointed out that MLB’s talk of “values” was hypocrisy, considering that New York – where the league has its corporate headquarters – has more restrictive voter ID rules than Georgia.

Georgia’s MLB franchise, the Atlanta Braves, chimed in as well, saying they were “deeply disappointed” by the move and adding that it was “neither our decision nor our recommendation.”

“Unfortunately, businesses, employees and fans in Georgia are the victims of this decision,” the Braves said.

While Democrats hailed MLB’s move as standing up for “democracy,” Republicans and conservatives called for a boycott of the league. Congressman Jeff Duncan (R-South Carolina) tweeted he would propose legislation to remove MLB’s federal antitrust exception, in light of their stance to “undermine election integrity laws.”

“An overwhelming bipartisan majority of Americans support requiring an ID to vote, and any organization that abuses its power to oppose secure elections deserves increased scrutiny under the law,” said Duncan.

He was backed by fellow Republican Chip Roy of Texas, who said he would co-sponsor and “aggressively push” such a measure.

The New York Post chose to comment on the controversy as well, accusing MLB of caving to partisan politics and “endorsing the overwrought and fundamentally false agitprop campaign” under pressure from “Democratic politicians and Twitter mobs.”

Campaign against Georgia “depends on ignorance of the facts and cowardice by those who know better,” the NYP editors argued, ending the editorial with a warning: “If the private sector doesn’t start standing up to this bullying, it’ll soon find itself with neither friends nor freedom of its own.”

US sports leagues opened their doors wide to social justice and political activism last year, as the riots over the death of George Floyd in Minnesota spread across the US.

MLB’s Manfred pointed out on Friday that the league was among the first to join the “Civic Alliance,” an association of over 1,000 corporations committed to “strengthen our democracy” in 2020. Other major sports leagues on board are Major League Soccer (MLS), the National Football League (NFL), the National Basketball League (NBA) and the WNBA, the golfing PGA Tour, Premier Lacrosse League, and the women’s hockey league WNHL.