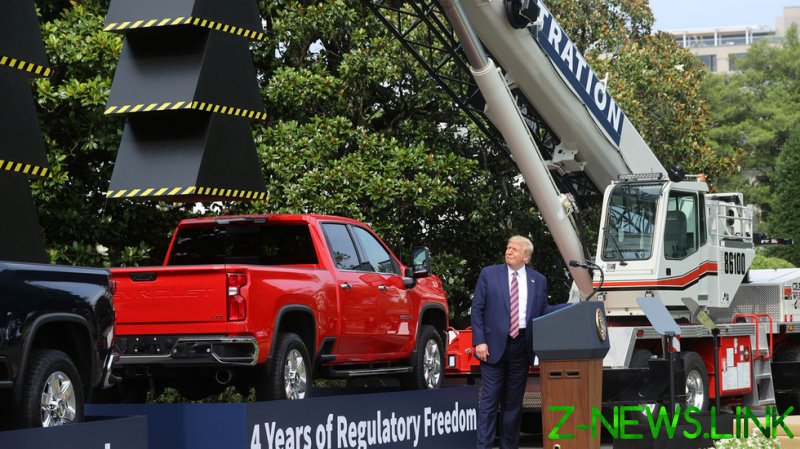 Trump bragged that the 33.1 percent GDP growth recorded for the quarter was the “BEST IN USA HISTORY” on Twitter on Friday, firing up his supporters by promising to do even better next time.

“IF I AM ELECTED [sic], NEXT YEAR WILL BE OUR BEST EVER!” he tweeted exuberantly.

While the quarterly GDP jump did indeed represent record gains for the country, it was less a rocket into the economic stratosphere than a much-needed climb out of the dire fiscal slump the US had plunged into earlier this year as the Covid-19 pandemic triggered nationwide shutdowns. The record increase barely canceled out the second quarter’s 31.4 percent drop.

The president’s haters on social media were quick to point to last quarter’s less-than-flattering numbers, accusing Trump of “crashing the economy” before swooping in to take credit for the partial recovery.

Others took the time to explain to Trump and his cheerleaders that “record growth” isn’t necessarily something to boast about when it’s preceded by a record decline.

Some confronted the president with less-rosy sets of statistics – on Covid-19 deaths, soaring unemployment, and the staggering federal deficit – and predicted another year under Trump would only make things worse.

“Lol – people are in breadlines and a wealthy guy tells us we’re good,” one observant user snarked.

While the markets may be creeping back up, the US is still down 10.7 million jobs from February employment levels, and extended unemployment benefits passed as part of the CARES Act bailout expired back in August. For many broke Americans, a nationwide eviction moratorium imposed by the Centers for Disease Control is the only thing protecting them from being put out on the street, and that won’t last forever. Hundreds of thousands of small businesses have closed permanently, and a significant chunk of the relief funding meant for Main Street was gobbled up by large corporations.

The New York Federal Reserve has predicted a much more modest 3.5 percent GDP growth rate for the fourth quarter, while other experts are predicting a so-called double-dip recession, especially if large parts of the country reimpose the lockdowns that plunged the economy into a death spiral in the first place.

Democrats and Republicans have engaged in a prolonged battle over a second Covid-19 stimulus package, with the measure currently on ice after Trump initially said he wouldn’t pass any such legislation until after the election. After that move proved wildly unpopular with all but his most fervent supporters, he relented, suggesting he’d be open to a standalone bill to send struggling US households a check – only for House Speaker Nancy Pelosi to categorically refuse a $1.8 trillion aid package even the other Democrats were willing to choke down.