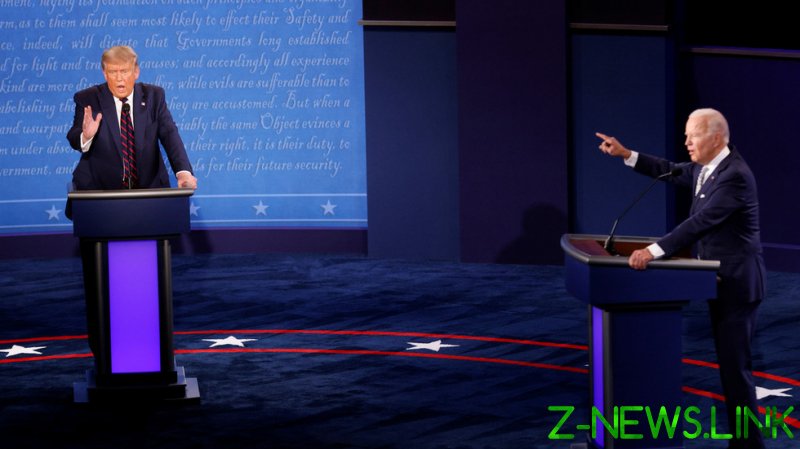 The ninety or so minutes on Tuesday evening in Cleveland, Ohio just cannot charitably be described as civilized. There was Biden, who addressed Trump only when he wanted to insult him, but otherwise reciting prepared talking points or turning to the camera to talk to the audience directly.

There was Trump, frequently interrupting both Biden and the moderator rather than wait his turn. And there was Chris Wallace of Fox News, bending over backwards to practically squire for Biden and load questions for Trump with some of the nastiest innuendo imaginable.

To name just one example, Biden has repeatedly treated as fact the calumny that Trump called neo-Nazis “very fine people” when asked about the tragic events in Charlottesville, Virginia in 2017. He did say those words – right before he condemned racists, white supremacists, neo-Nazis and the KKK in the strongest of terms. Yet Biden repeated the claim tonight and Wallace did the same. Little wonder Trump was livid. Wouldn’t you be?

That wasn’t even the lowest point of the night. As Trump repeatedly brought up a Senate report accusing Biden’s son Hunter of receiving multi-million dollar payments from Ukraine, China and Russia, Biden kept repeating that’s not true. Then he did a switcheroo, claiming Trump had instead insulted honor of his dead son Beau by calling US soldiers “losers and suckers.” Except the Atlantic story asserting that was actually discredited by numerous people who spoke on the record.

Biden also claimed he “never said” the US troops were “stupid bastards.” Except there’s video of his 2016 visit to Iraq where he literally says just that, albeit as part of a joke. But because Fox was the one to report on it while CNN and MSNBC ignored it, a large portion of the American public doesn’t believe it happened.

Which brings us to the heart of the problem. Tuesday night’s debate featured a sitting president and a former vice president who did not have a disagreement of opinion so much as two completely different sets of facts. Biden was literally working from a set of prepared talking points, circling back to them even when they were irrelevant to the question at hand, and simply dismissing everything Trump said as a lie.

Trump did not behave the way Americans have been taught a sitting president should. Instead, he acted like a journalist, peppering Biden with tough questions he never gets from the press. And how could he, when the Democrat has spent the past week calling a “lid” on the press first thing in the morning? When Biden does talk to the press, they ask him what he thinks of Trump’s (supposedly rotten) soul.

It is precisely because the press has been totally derelict in its duty that Biden can assert Trump is “Putin’s puppy” (thanks, Russiagate!) or the above-mentioned Charlottesville lie, or treat the debunked stories about “Russian bounties” and Trump’s alleged disdain for US troops as proven facts, while declaring any criticism of his record or his family’s business dealings as “discredited.” The mainstream media saying so doesn’t make it so.

The proliferation of hyper-partisan “fact-checkers” who routinely label Trump’s hyperbole as “lies” but bend over backwards to cover for the whoppers coming from his critics only make the situation worse. Nearly the entire mainstream media industry had endorsed Hillary Clinton in 2016. Millions of Americans voted for Trump to send them a message, but instead of soul-searching they just doubled down.

An actual free press would go through the shouting match – for a “debate” this was not – line by line and point out the hypocrisy, factual errors, personal insults and dubious claims made by both candidates and the moderator. No one will do that, just you watch. Because the job has long since stopped being about reporting facts, having turned into shaping narratives instead.

There is a reason the US Constitution puts freedom of speech and the press in the first amendment – followed by the right to bear arms as the second. Thomas Jefferson believed the press was the best way to keep the government in check. His fellow founder Benjamin Franklin had a more jaded view, wondering even in 1789 as to who would check the press itself. It was Franklin who advocated that freedom of the press ought to be paired with “liberty of the cudgel” that could protect the reputation of the people maligned just as their person was protected from assault.

Certainly, this isn’t the first time in American history that political debates have been raucous and the press partisan – but that state of affairs eventually brought on the Civil War, so that’s cold comfort.

Both Jefferson and Franklin believed that the republic they brought into being could only avoid lapsing into a tyranny – the very fate that befell Rome and ancient Athens, which they looked to for inspiration – with the help of a free and responsible press to keep the politicians in check.

What the first presidential debate of 2020 showed is that this mechanism is now almost completely gone. Without it, it may not matter who actually wins the election, by whichever date whatever ballots are cast may end up getting counted.