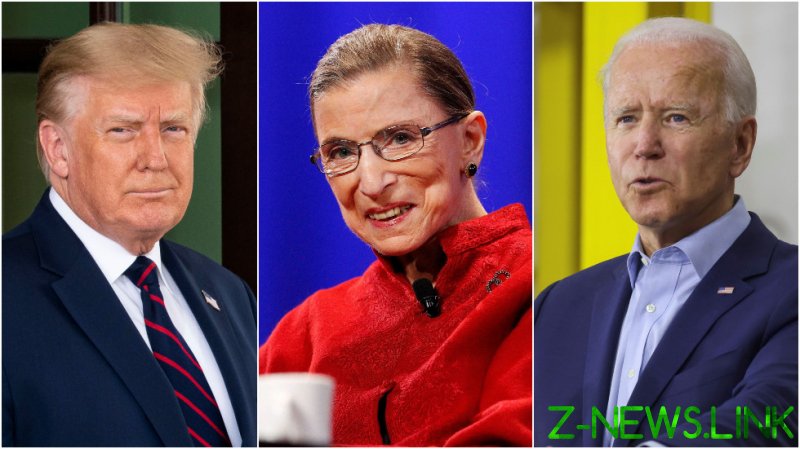 After a years-long battle with cancer, Ginsburg’s passing on Friday prompted a flurry of statements from Democrats and Republicans alike, many paying tribute to her long career on the Supreme Court, where she championed progressive causes.

US President Donald Trump was caught on film as he learned of the news, reacting with surprise before saying “she led an amazing life… whether you agree [with her] or not.”

He later issued a statement calling the late justice a “titan of the law,” while a spokesperson for the president confirmed to AFP that flags at the White House would fly at half-staff to mark her passing.

Joe Biden, Trump’s rival in the upcoming election in November, also mourned Ginsburg’s death, saying she “stood for all of us” and “practiced the highest American ideas as a justice.” He added, however, that Ginsburg’s replacement should wait until after the presidential race.

Biden’s remarks came soon after Senate Majority Leader Mitch McConnel reiterated his vow to leave no vacancies in the Supreme Court before the end of the 2020 race, in which the GOP risks losing its majority in the upper chamber. While McConnel celebrated Ginsburg’s “extraordinary American life,” he insisted Trump’s replacement nominee “will receive a vote on the floor of the United States Senate.”

The Senate leader’s stance comes in stark contrast to his position following the death of conservative Justice Antonin Scalia in 2016, at the tail end of Barack Obama’s second term as president. At the time, McConnel insisted on delaying any confirmation vote for his replacement until after the 2016 election, ultimately running out the clock until Obama’s nomination of Merrick Garland expired.

Taking a subtle jab at McConnel, the Senate’s Democratic Minority Leader, Chuck Schumer, quoted the Republican’s words in 2016 verbatim, arguing “this vacancy should not be filled until we have a new president” and that “the American people should have a voice in the selection of their next Supreme Court Justice.” In a separate tweet, Schumer celebrated Ginsburg’s career, calling her “a champion for justice” and “a trailblazer for women.”

Leaders in the House of Representatives similarly marked Ginsburg’s passing, with Democratic Speaker Nancy Pelosi noting that flags on Capitol Hill were also flying at half-staff to “honor [her] patriotism,” while the GOP’s House minority leader, Kevin McCarthy, said Ginsburg had “served the Supreme Court – and the country – faithfully for 27 years.”

While the justice’s death prompted a rare moment of unity in Washington, the battle over her replacement is set to be a bitter partisan struggle, as the GOP-led Senate is likely to race to confirm President Trump’s nominee ahead of the November election – assuming he selects one. Democrats, meanwhile, will likely look to delay the process as long as possible, hoping to take over the Senate and the White House before the empty seat can be filled with a conservative justice appointed by Trump.