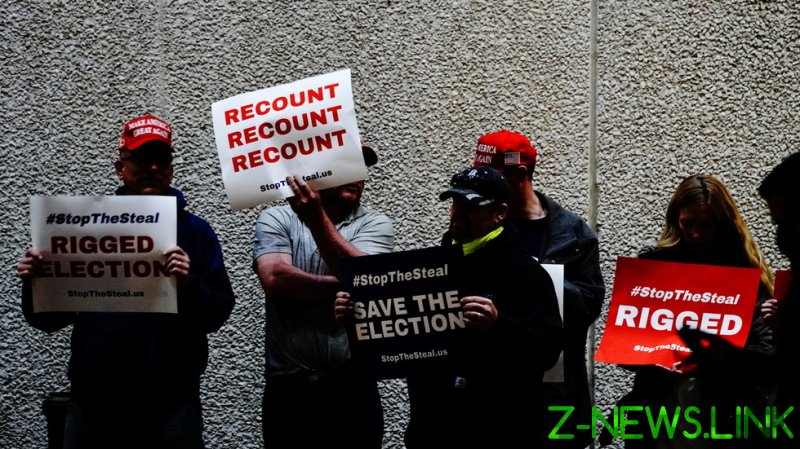 “To manufacture votes for Joe Biden, they have done it in every way imaginable,” Powell told Fox News’ Maria Bartiromo on Sunday. “From having dead people vote in massive numbers to absolutely fraudulently creating ballots that exist only voting for Biden.”

“We have identified at least 450,000 ballots in the key states that miraculously only have a mark for Joe Biden on them and no other candidate,” she continued, before alleging that vote-counting software and hardware manufactured by Dominion Voting Systems was used to “flip” votes from Trump to Biden.

Dominion’s equipment was used in 28 states, including Pennsylvania, Michigan, Wisconsin, Nevada, Georgia and Arizona, where the Trump campaign has alleged fraud took place.

Powell claimed that computer “glitches” in Dominion’s software were used to tilt the vote against Michigan Senate hopeful John James and Georgia Rep. Doug Collins. “There were many people affected by this,” she said. “We have got to fight tooth and nail in federal court to expose this abject fraud and the conspiracy behind it.”

Recounts and audits, she concluded, are needed in “frankly most of the country.”

Biden claimed victory on Saturday, after Associated Press called the state of Pennsylvania, and with it the presidency, in his favor. Trump has declared Biden’s win fraudulent, though mainstream media and Democrat officials have stated that there is no evidence of foul play.

Trump’s legal team is determined to prove them wrong, though, and the president’ lawyer, Rudy Giuliani, told Bartiromo on Sunday that the first lawsuit – which alleges widespread fraud in Pennsylvania, will be filed on Monday. As many as five legal cases may be brought before the end of the week, Giuliani added, telling Bartiromo that he has gathered enough evidence to overturn Biden’s razor-thin wins in both Pennsylvania and Michigan.

Seemingly unperturbed by the looming legal challenges, Biden has pressed ahead with his transition into office. The former vice president opened a “Biden-Harris Presidential Transition Team” Twitter account on Sunday, promising to “rise stronger than we were before.”